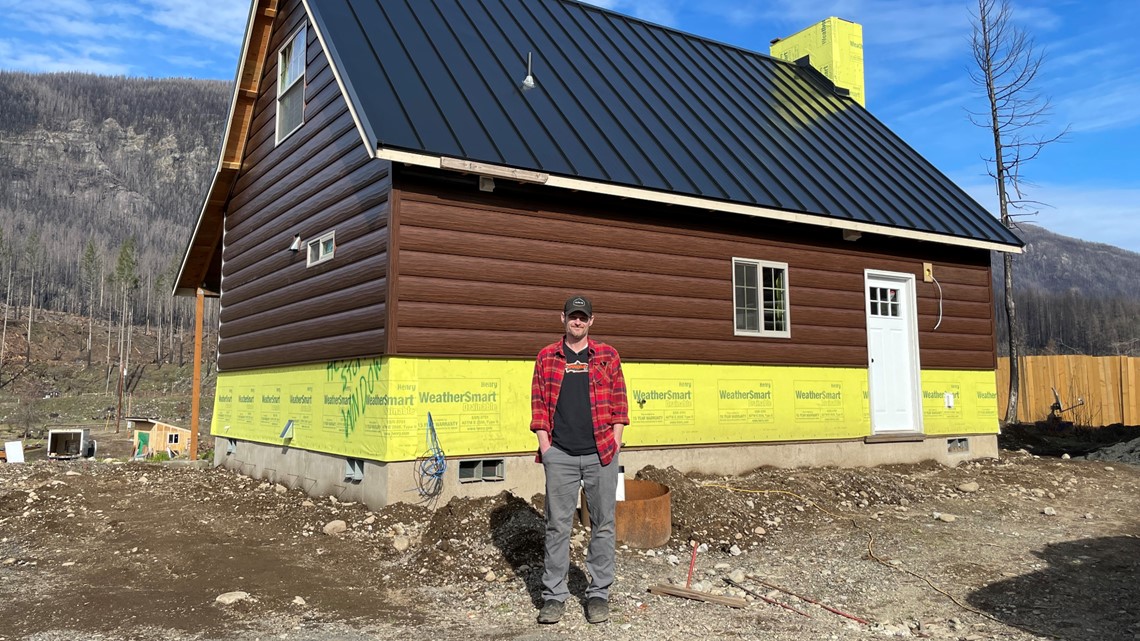 Brandon Kirk says he and his wife were rejected four times by both FEMA and the Small Business Administration before receiving help. Then more financial headaches began.

LYONS, Oregon – Survivors of the Santiam Canyon wildfire are in many different stages of recovery. Some have been fortunate enough to complete their new homes, while others are just getting started. But some families are now facing unexpected financial hurdles.

Brandon Kirk and his wife are in the process of rebuilding their now fireproof home in Lyon.

“The first thing we went for was a metal seam roof,” Kirk said while showing KGW his new home. “The doors are steel and the windows are tempered.”

Located on the banks of the Santiam River, Kirk’s property has come a long way after the devastating wildfire of 2020. He said his insurance company is great, but he’s having trouble with his mortgage company.

He and his wife were told they would need to apply for help from both FEMA and the Small Business Administration (SBA). He said an SBA representative visited the property and gave the green light for a loan.

“He’s like, ‘Oh my God, you lost your house. You lost your shop. My contractor said, ‘Oh, that should cover everything for your little 1,000 square foot house.’ So that’s what we’ve been working on,” Kirk said.

So construction started quickly. But then came a financial roller coaster ride.

“[We] was rejected four times by each organization, FEMA and SBA, before we really gained momentum, and then a year later we got an award from FEMA. And then, literally 481 days later, we got SBA funds,” Kirk said.

KGW has heard from several families who have said the same thing, that they have been denied FEMA assistance multiple times, even with the help of a disaster worker.

Kirk said the cumbersome and frustrating process is taking a mental and emotional toll on wildfire survivors.

“When you have to deal with the bureaucratic process of being rejected four or five times before you’re approved and it’s a known issue, it gets really frustrating. I think unfortunately a lot of people’s mental health is getting worse and worse, it’s going to be longer,” he said.

RELATED: Trees are being planted in fire-ravaged Santiam State Forest

In Kirk’s case, after he and his wife eventually received help from FEMA, as well as help from local nonprofits and organizations, he said there were other issues.

That’s almost 80% less than Kirk expected. The process has given Kirk and his wife a headache. At one point he said he was told he would not get any credit at all. Kirk then had to rely on local organizations like the Santiam Service Integration Team (SIT) to give him money to pay part of the $95,000 he owed his then-contractor. He said he had changed gears and was trying to get loans from credit unions when he was contacted again.

The agreement was that in order for Kirk to get the money, the SBA had to put the title on their house. But then he got another surprise.

“The SBA requires that all funds received from insurance and available to the owner be used toward disaster repairs,” Wynne said over the phone.

Wynne also said it was against the law for the SBA to duplicate funds it received for recovery.

“We depend on that [money] to build the house and they don’t take into account the fact that we had to clean up. We had to rebuild the fence. We’re not rebuilding our 900-square-foot cedar deck because we can’t afford it,” Kirk said, citing additional costs associated with post-fire salvage.

Melissa Baurer of the Santiam Service Integration Team, which helps wildfire survivors and connects them with disaster workers, said other families are experiencing similar issues.

“They expected this loan to help them and their recovery and they took that into account when hiring their contractor and now they’re not getting that [money]’ said Bauer.

In the meantime, Kirk is grateful for the help from Baurer and SIT. He said he’s also grateful for government money helping him pay for his home because of the fire safety measures he’s put in place. Kirk is trying to stay positive, though he said he still owes his contractor $40,000.

He figures he’ll have to spend at least another $10,000 to insulate the drywall and finish the house. Kirk hopes the house will be ready by April. But for now, he knows his home should be safe if there’s another wildfire.

“It will be a rockfall, a meteor or a volcano. But it won’t be wildfire. I promise,” he said.

Kirk said the people of Santiam Canyon have been weathering the same storm since 2020, but are in different boats.

“People still need help and that is something to remember. We’re all still recovering and a lot of people are nowhere near as far as you can see here,” he said.

“As we […] As we face more and more disasters that are of greater severity and impact on rural and urban Americans, it’s a broken system that we honestly need to fix.”

A proposed bank in Iowa wants to support small businesses