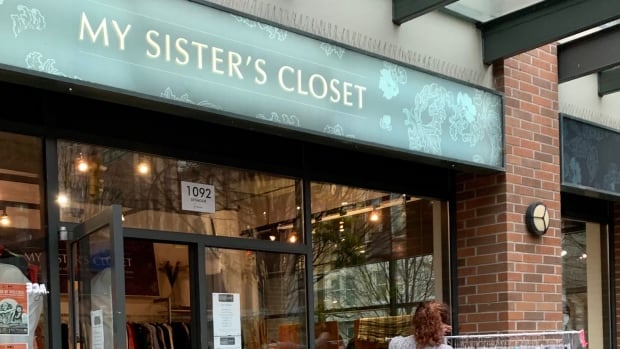 My Sister’s Closet is a social enterprise of Battered Women’s Support Services (BWSS), a Vancouver-based organization that provides services and community education related to violence against women.

He says all of his income goes to fund BWSS programs and services.

BWSS executive director Angela Marie MacDougall said the organization had seen greater use of its services since the start of the pandemic.

â€œOur numbers are definitely higher than last year and years beforeâ€¦ we have certainly had a lot of women contacting us through the store who deal with the violence, either by calling the store itself or casually. ”

The store sells new and used clothing and creations made locally by women. Stores in downtown and East Vancouver accept donations from the public.

MacDougall said that as a social enterprise, the store’s goal is to focus on people rather than profit.

â€œIt allows people to interact with the problem in a much more comfortable way,â€ MacDougall said.

Another key principle of the store is to champion sustainability by encouraging the reuse of clothing.

â€œWe’re helping slow the flow of fabric to the landfill, which is important because the fashion industry is the second biggest polluter of oil and gas,â€ MacDougall said.

Shannon Salter has been a regular customer of the store for over a decade. Salter said that when she started working as a lawyer while managing student loan debt, she came to My Sister’s Closet for affordable work clothes.

â€œThere is something for every taste. There is clothing for every body and every priceâ€¦ It’s such a wonderful and welcoming environment for everyone,â€ said Salter.

Salter also shops at My Sister’s Closet to support the organization’s mission, in addition to enjoying their clothes.

“I think they are doing a tremendous amount of good for a very limited amount of fundingâ€¦ especially during the pandemic when the need for their services has really skyrocketed.”

Thursday, November 25 marks the start of a 16-day international campaign of activism against gender-based violence. The campaign, launched by the Center for Women’s Global Leadership, seeks to raise awareness and end violence against women and girls.