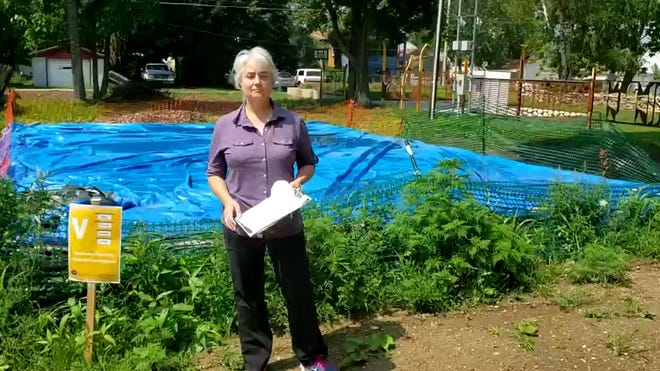 The Sisters of Saint Joseph neighborhood network is ready to step up its urban farming game with crucial help from the Erie Zoning Hearing Commission.

The nonprofit neighborhood organization plans to build a 1,000 square foot largely underground greenhouse in the 400 block of West 19th Street in the Little Italy neighborhood of Erie, where a dilapidated single-family home once stood. .

The Neighborhood Network, which serves poor neighborhoods in eastern and western Erie, acquired the property in 2020 and had the house demolished.

Plans call for what is called a walipini greenhouse on the site. It is an underground greenhouse with a transparent or translucent roof that is naturally heated and cooled by the earth.

The greenhouse will be used to grow produce, herbs and other plants year round to support the Neighborhood Network Farmer’s Market, urban agriculture education and food insecurity programs, said Heather Caspar , executive director of the organization.

It would be the first such greenhouse erected by a neighborhood organization within the city limits, said Caspar, who added that the neighborhood network has so far secured around $ 100,000, including grant funds. , to build the greenhouse; the exact cost of the project is still being determined.

â€œWe may find that construction of the structure and finishing of the entire site will continue until next year, following further fundraising for the project,â€ said Caspar.

David Brennan, director of Erie’s office at Cleveland-based Bostwick Design Partnership, said the West 19th Street home “was not economically feasible” to renovate. However, he said, the greenhouse project fits the overall community improvement goals of the neighborhood network.

Brennan is also a member of the Erie City Council; his company helped design the greenhouse.

Inspired by a project in Detroit

The Neighborhood Network greenhouse project, according to Caspar, was inspired by the work of Steven Mankouche, a professor at the University of Michigan, who led the creation of a sunken walipini greenhouse in Detroit using the foundations of a burnt down house in ruins.

Walipini means “place of warmth” in the language of the Amaraya Indians of Bolivia.

Mankouche is consulting with the Neighborhood Network on his greenhouse project, Caspar said.

â€œThere are so many vacant and dilapidated properties in our neighborhoods, and you can only have a limited number of (outdoor) gardens and green space,â€ Caspar said. â€œWe are always trying to find other ways to use these spaces.

The foundations of the razed West 19th Street house, which are about six feet deep, have been left intact on the site and the greenhouse structure will be placed on top.

The project passed a major hurdle on July 13 when the Erie Zoning Hearing Panel approved an exemption to the use of the property. The exemption was necessary because greenhouses are generally not permitted, under city zoning rules, in residential areas like the 400 block of West 19th Street.

At the meeting, which took place online, Caspar explained that the greenhouse “will advance our programs for the neighbors” in several ways.

She said the greenhouse could be used for various urban agriculture education programs for residents, including children.

The Neighborhood Network also operates a farmers’ market during the summer months and operates soup kitchens and pantries to help citizens in need.

The Neighborhood Network has also developed a small community park adjacent to where the greenhouse will be built, Caspar said.

Plus, she said, the project aligns with Erie Refocused, the city’s comprehensive long-term development plan.

Erie Refocused aims to meet the future needs of the city in terms of transport, housing, land use planning, economic development and other areas, in order to combat decades of systematic decline. The plan specifically suggests that the city find creative uses for vacant properties / green space development.

The members of the Zoning Hearing Panel agree.

â€œI congratulate you on a really interesting use of an otherwise problematic property,â€ said Laura Guncheon, member of the board of directors.

No one spoke out against the project at the July 13 meeting. The neighborhood network also contacted adjacent landowners about the project and obtained several letters of support.

One of those written statements was from Craig Sheehan of Erie, who owns a house in the 400 block of West 19th Street.

â€œIt seems like a wonderful improvement for the neighborhood,â€ Sheehan wrote on July 6. “You certainly have my support for the project.”