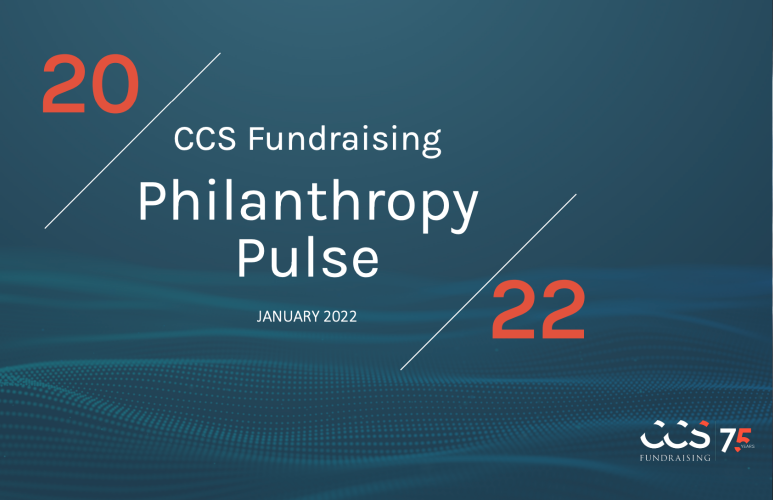 Nonprofit leaders anticipate a strong fundraising year in 2022, with 70% having resumed face-to-face donor meetings or events from November 2021, and a similar percentage (69%) anticipating a increase in major gifts, according to Philanthropy Pulsea report by New York-based strategic advisory firm CCS Fundraising.

Respondents cited family foundations and donor-advised funds as sources that have loosened their purse strings over the past two years, with 81% of the former and 80% of the latter having done so. Other growing sources of funding include appreciated assets, cited by 61%, bequests (57%) and pension plans (46%).

Looking ahead, 69% of respondents expect major gifts to increase as a source of giving in 2022, and only 7% expect major gifts to decline. Just under two-thirds (64%) anticipated an increase in mid-level giving, and just 2% anticipated a decline. Other channels seen as increasing their contributions include annual appeals (61%), deferred giving pledges (56%) and memberships (56%).

Some funding sources were more likely to be perceived as reducing their magnanimity. Government grants were the source most likely to be reduced, with 21% of respondents anticipating reductions and only 29% anticipating increases. 14% said events, despite some organizations stepping up efforts from recent levels, would still see a decline in revenue. And 10% said membership fees, as institutions face sporadic openings and consumers have increased competition for their money, would also decline.

Organizations don’t passively wait for good fortune to befall them. Almost two-thirds (64%) reported some form of major capital or overall campaign, whether planning, initiating, reviving or continuing such efforts. And concerns about the next wave of coronavirus aren’t going to limit in-person meetings: nearly one in five nonprofits have fully resumed these activities, more than half (53%) of organizations surveyed have them partially restarted and most others will resume in the first half (16%) or second half (6%) of 2022.

That said, the pandemic has permanently changed the way organizations operate. More than six in 10 (61%) said virtual events are here to stay, and just over half (55%) will continue to offer part-time or casual remote working hours. The increase in digital operations will also continue, with 49% pushing digital giving, a similar percentage maintaining an improved social media presence and 42% pushing ahead with demand for virtual gifts. Just over a third (36%) say the enhanced one-to-one communication strategies they implemented in the wake of the pandemic will continue.

Increased awareness of diversity, equity, and inclusion (DEI) initiatives is reflected in the fundraising activities of nonprofits. Currently, 62% of respondents incorporate DEI into their strategic fundraising plans, and 28% intend to do so. Organizations also do not keep DCI concerns to themselves, with 58% ‘always’ or ‘frequently’ discussing these issues with their donors, and 33% saying they do so ‘often’.

Not-for-profit DEI activities include changing hiring practices or board relationships, as noted by 52% of respondents. Just under half (49%) provide DEI training to fundraising staff and/or board members and 46% have changed their messages or presentations to reflect their support for DEI. Just under a third (32%) have made changes to staffing or leadership structures that reflect DEI issues.

The results are based on responses from representatives of 877 organizations. Responses were collected in October and November 2021. A full copy of the report is available here.