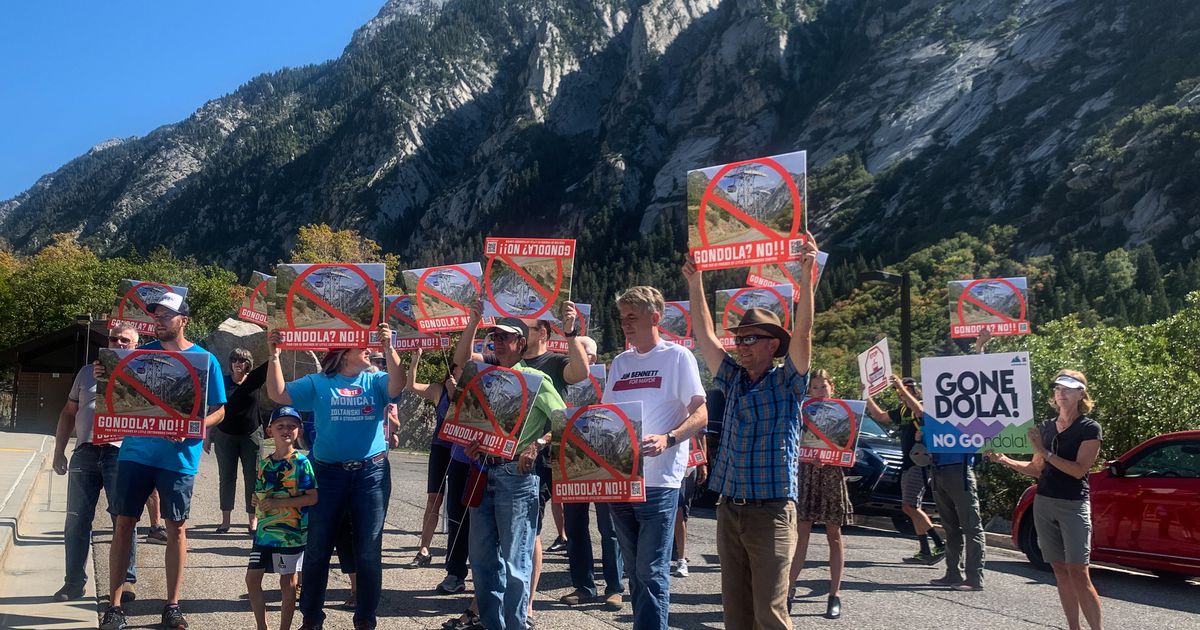 Many participants believe that the two solutions proposed by the Utah Department of Transportation would undermine the beauty of the canyon.

Patches of orange and gold leaf dotted the cliffs above Little Cottonwood Canyon as vehicles honked their support on Saturday as residents and politicians protested against the gondola proposed by the Utah Department of Transportation (UDOT).

A few dozen activists held up signs as the fall sun shone on the concrete of Little Cottonwood Canyon Park and Ride on Saturday. Cries of “No gondola!” Filled the air as leaders and political hopefuls on the microphones explained the damage a gondola would do to the natural landscape.

“The problem is really only about ten days a year – when we have big days of heavy snow and traffic slowing down,” said Whitney Wilkinson, a resident of Sandy with Friends of Little Cottonwood Canyon. â€œThe problem is not as big as the solution we’re trying to build, and the gondola will create a problem rather than solve the existing one.

â€œFor 10 days a year, we spend billions of dollars getting skiers up the canyon,â€ she continued, â€œwhen there really are so many other options to explore – whether they’re improved bus routes, whether toll […] Let’s try the small solutions first before moving on to the more extreme and permanent solution.

Many protesters have lived in the area for decades and do not want to see the canyon disfigured by massive eight-mile rides for a gondola. Bob Douglass, a resident of Cottonwood Heights, said National Geographic showed the canyon as a definition of the “majesties of the purple mountains” featured in the song “America the Beautiful”. This beauty must be protected, he said.

“It’s their idea of â€‹â€‹wild America, [but] with the giant gondola here it won’t be wild America anymore, â€said Bob Douglass, a resident of Cottonwood Heights. â€œThe truth is that half a billion dollars of our money – your – money will go to some developers who want to build a ski village here in the mouth where we are and two private companies up the hill. . It’s just not worth destroying the canyon for that, and we could spend that half a billion dollars doing something that would benefit the entire valley. “

Fred Burton lived at the mouth of the canyon for 35 years and was part of the decision-making team for the 2002 Olympic Committee. He said that, during this time, the canyon has been examined by experts and Environmental Protection Agency, and Little Cottonwood Canyon was determined to be “too fragile, too vulnerable to even think about putting [in] any type of place or any type of activity.

â€œNothing has changed in this canyon over the past 20 years,â€ said Burton. “I don’t know what it is, unless it’s about money.”

Burton doesn’t want to see the canyon turn into a tourist attraction that could harm the natural environment with thousands of visitors he can’t stand.

He mentioned the tourism boom that Zion National Park has received in recent months and said more visitors would lead to even more development in the region. Meanwhile, the mountain goats that thrived along the cliffs are already scarce due to ongoing construction projects, Burton said.

Many protesters echoed the feeling that resorts and skiing are not the go-to destinations when the canyon is already the destination.

Gay Lynn Bennion, D-Cottonwood Heights, said she wanted to protect the raw beauty of the area. Bennion – along with eleven other Democratic representatives – signed a letter against the gondola and widening roads, stating that “we have to live with what we have” to protect the canyon.

â€œI climbed the Pfeifferhorn this year here for the first time,â€ she said. â€œAnd on my way up this great hike, I took an early morning photo of this canyon with just this little narrow road. And I don’t want that to change.

â€œI want this to remain a wild place,â€ Bennion added. â€œThat’s why we love it. And I don’t want us to mess this up because we want to get there faster.

ECHO organizes the 10th edition of the Long Walk Home