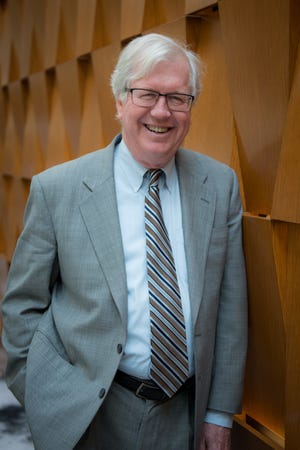 WASHINGTON – Jeff Finkle, a 1972 Newark High School graduate who is retiring early next year after 35 years as head of the International Economic Development Council and its predecessor, attributes part of his success in his experience as a journalist.

Finkle, a graduate of Ohio University, was considering careers in journalism, law, and education, became a state lobbyist, developed an interest in real estate, and worked for the Department of Housing and Urban Development, before finding its place in economic development.

But, through all the twists and turns in his career before he landed on economic development, Finkle stressed the importance of the business management skills he acquired between the ages of 12 and 17, delivering The Advocate. He said it could be the subject of a future speech.

“I see all this knowledge of how to run a business by running this damn paper road,” Finkle said. “I learned how to make sales. They taught us the service. They forced you to collect. These are life experiences. Although they appear small, the collection is the collection, whether it’s 42 cents or $ 150,000. You just have to persevere. “

He said that his father, brother and sister also carried newspapers and that his mother worked in the attorney’s office. All the neighbors knew him from his paper route, which helped him get jobs in lawn mowing and snow shoveling, too.

Finkle, an internationally recognized expert on economic development, a frequent speaker, author of numerous articles and guest on political talk shows, said his years at Newark High School did not foreshadow such an illustrious career.

“I wasn’t a good student in Newark and one of the reasons was that I was putting all my energy into other things,” said Finkle, who was on the debate team and was involved in the school yearbook and editor-in-chief. “So the expectations probably weren’t that high, but then I went to OU and did really well. Eventually I started to focus, that’s what they might say.”

As his focus improved, the direction of that focus continued to change.

“When I went to OU I was always interested in going to law school and was part of the debate team and by the time of my freshman I was a bit exhausted and I didn’t didn’t know how I would pay for law school either.

“I got my certification to teach because I thought when I left school I had to have a trade. I never taught a day.

He became involved in Republican state politics and worked for the administration of Governor James Rhodes, becoming a lobbyist on the capital construction budget.

A few years later, he moved to Washington DC to work for a friend at the Department of Housing and Urban Development, where he managed the Community Development Block Grant program.

After five years at HUD, he left to lead the Council for Economic Urban Development, which merged with another organization in 2001 to become the IEDC, now the largest membership organization for economic developers.

“If someone had told me in high school that I would spend the last 35 years leading a national membership association, first I would have said what it was, and second, I would have had no idea of what the job would be. “

Finkle said the current divided political landscape can be a barrier to economic development, but it’s not always party-divided.

“Republicans ran the Senate. There were programs Trump would have eliminated for which the Senate and the House agreed on more money, not less money. “

And, he said, politicians are known to compete for credit for successful development.

“I think that will always be the debate,” said Finkle. “What political egos are at stake in a particular deal. This is a minefield that every economic developer must uncover.

“And, God forbid, in Licking County a Democrat is trying to take credit for himself. Will anyone else put money in to support an idea backed by a Democrat? But the good projects have a lot of owners.You will always have an ideologue, left or right, but if they are at all pragmatic, they will embark on good economic development projects.

The labor shortage and so many overseas-made products are serious concerns for the country’s future, Finkle said.

“We’re going to have to train a lot more people,” he said. “We are still part of the baby boom generation and more of us are going to leave the workforce and talk about our skills with us. The good news is that there is a lot of money going out. People who want a job will probably be able to find a job.

“And our supply chains are broken. Are we going to get smart and be successful here? We’re going to have to rebuild our economy, so we don’t depend on other places as much. A lot of companies learned their lesson (during COVID) from them. supply chain hasn’t worked for them. So I think they’re going to have to think about building more expensive labor into their pricing model. “

Finkle, 67, said his career has benefited from developing certain skills, making the right contacts, finding the right niche, timing and a bit of luck.

“Happiness – the right place at the right time,” he said. “Fortunately, I was good enough that people liked the idea of ​​me coming to work for them. I was respected enough when I said something to people, they believed me.