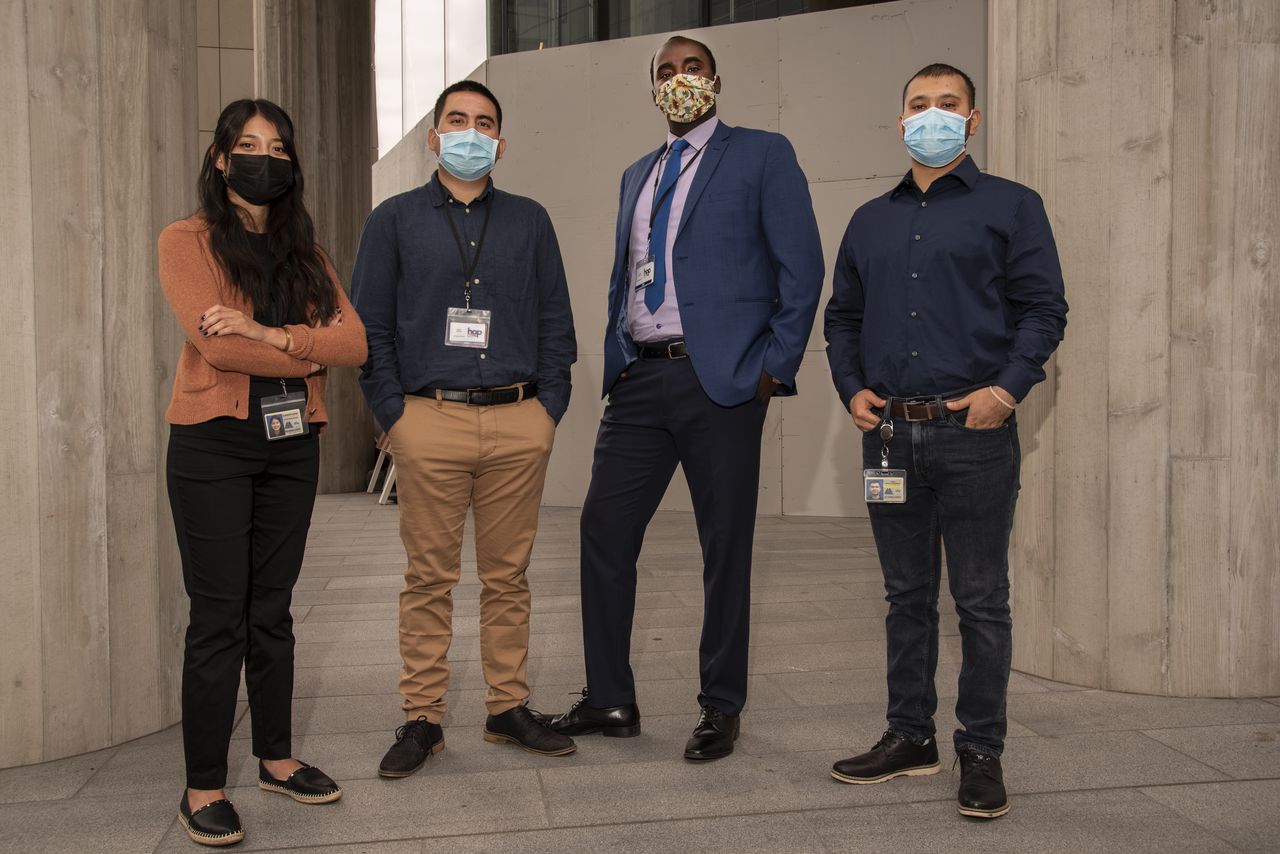 On a recent Monday morning, Juan Raya-Figueroa walked into the Multnomah County courthouse and scanned the court file for the day’s eviction cases.

He then proceeded to the courtroom, where he spent the next two hours listening to a succession of 16 eviction hearings, noting instances where troubled tenants had been brought to justice for late payment.

At the end of each, Raya-Figueroa rushed for the door, chasing the tenants – some with their families in tow – before they could leave. In the hallway of the courthouse, he told them they could avoid the eviction, at least for now, by asking for help. Multnomah County, he said, would guide them through the process.

â€œWe are trying to help every family and every individual that we can,â€ said Raya-Figueroa.

Raya-Figueroa is one of 13 staff at Bienestar de la Familia, a Multnomah County social services program, assigned to the county’s concerted efforts to prevent a wave of evictions after the end of moratoriums on local evictions , state and now federal in place during the coronavirus pandemic. Part of that job is intercepting tenants facing imminent eviction to make sure they know what help is available.

Oregon’s ban on residential evictions for non-payment of rent expired in late June, while a separate targeted federal moratorium that was scheduled to last until October was rejected by the Supreme Court last week.

Oregon lawmakers in June approved an interim measure that protects tenants from eviction for 60 days after they apply for rent assistance and notify their landlords. A local ordinance in Multnomah County extended these protections from one month to 90 days.

But despite those protections, evictions increased in the weeks after the Oregon moratorium expired.

“What is happening is that tenants are not always aware that rent assistance is available, or that they are not aware that there are safe havens that the legislature has put in place. to give people time to access rent assistance, â€said Becky Straus, an attorney for staff at the Oregon Law Center. â€œSo the unfortunate result is that there are a large number of preventable evictions going through the court. “

These are the tenants that case managers like Raya-Figueroa are trying to rule out in court Monday through Thursday.

Case managers work closely with staff at the Oregon Law Center, which provides legal support to tenants who receive eviction notices. The county is paying the nonprofit legal center $ 300,000 to dedicate two lawyers and a paralegal to the program.

The county has also partnered with Metropolitan Public Defenders to screen eviction notices for egregious violations in an attempt to settle evictions before a tenant finds himself in court. These violations could include a landlord who does not give a tenant 10 days to pay missed rent after issuing a termination notice or who attempted to evict a tenant for missed rent between April 2020 and June 2021. Tenants have until next February to offset these payments.

Before the Oregon moratorium on evictions expired, the Oregon Law Center had already started hiring staff statewide, anticipating a significant increase in eviction cases. Association leaders hope this will be enough to provide legal assistance in the coming months to every tenant in the state seeking help in an eviction case.

Along with its contract in Multnomah County, the Legal Center recently contracted with the City of Portland to start an eviction defense program for low-income residents. So far this year, only about 6% of tenants facing eviction in Multnomah County have been represented by counsel, while about half of landlords in these cases have been represented by counsel, Straus said. .

Staff at the Oregon Law Center routinely compile contact information and home addresses for tenants in eviction court. When Bienestar’s case managers cannot reach tenants in court – some virtually attend or fail to show up, believing the outcome to be inevitable – they instead visit tenants at home. Renters can also reach the County Eviction Prevention Team by calling 211.

This is how Anthony Harris heard about the Eviction Prevention Program.

Harris worked as a chef before the pandemic, but the Portland restaurant where he was employed was hit hard by closures and evolving restrictions last year. As of October, Harris, 57, was only working part-time and struggling to pay his rent and utility bills. In February, the restaurant closed its doors completely, leaving him unemployed. Six months later, he still has not found another job.

When the moratorium expired, Harris was already eight months behind on rent for the Southeast Portland apartment where he has lived for eight years. Harris said her landlord requested and received a refund from the state Landlord’s Compensation Fund for the missed rent until June 2021.

But when Harris couldn’t pay July’s rent, her landlord still served her with an eviction notice.

That’s when a friend told Harris to call 211. On the same day, a Bienestar case manager called him and his landlord to say the county would use the federal funds to. pay her rent for July and August and provide her with documents to receive the 90 days. protection against eviction granted to persons applying for rental assistance.

â€œI guess I was blessed by the grace of God to get this help when I really needed it,â€ Harris said.

As of August 20, Multnomah County had paid more than $ 146,000 to 67 tenants who had received eviction notices. This money covers up to two months of rent for tenants, providing a temporary stay.

For tenants for whom two months of assistance will not be enough, Bienestar employees will help them apply for the Oregon Emergency Rental Assistance Program, a $ 204 million federally funded, state-run program that can cover a tenant’s rear rent and up to three months of future rent.

â€œIt’s about keeping people off the streets,â€ said Emiliano Ibarra, a Bienestar case manager. “The only way to keep our community healthy and prosperous is to make sure people have homes to come back to.”

The targeted eviction prevention program has enabled the county to respond to cases where tenants are in immediate danger of losing their homes, but tens of thousands of tenants across Oregon, including in Multnomah County, could still be forced out of their homes if state and counties don’t start processing rental assistance applications more quickly.

Community organizations statewide say a centralized application system that Oregon Housing and Community Services rolled out in May for the Oregon Emergency Rental Assistance Program has been plagued by software issues, resulting in a massive backlog of applications.

More than 30,000 Oregon households have applied for about $ 181 million in rent and utility assistance under the program since applications opened in May. Just over 10% of these requests were processed to August 26, with 3,238 tenants receiving more than $ 19.5 million.

Multnomah County, which received the lion’s share of claims under the program, had paid $ 807,008 to just 160 of the 10,364 tenants who had asked for help as of Aug. 26. More than half of the requests the county has received have yet to be reviewed, although data indicates the county is starting to process requests faster.

The state also hired a new provider to process between 7,000 and 8,500 requests in the Portland metro area to speed up the process.

But the slow rollout of rent assistance could undermine the county’s efforts to keep tenants in their homes.

Tenants in Multnomah County whose applications for rent assistance are not processed within 90 days – or 60 days for tenants elsewhere in the state – after notifying their landlords that they have requested assistance will lose their protection against expulsion.

“These are tenants who know that rent assistance is available, they have applied, they have given their letter of protection to their landlord, they have done whatever the state has asked them to do,” Straus said. , “and yet they are still dependent on the agency to process the request and prevent their displacement.

At the same time, the help available may not be enough for some tenants who continue to struggle to pay their bills.

Oregon’s unemployment rate fell to 5.2% in July as the state created 20,000 jobs, but many tenants still struggle to keep up with their payments as they try to recover damage from the pandemic. The delta variant has led to record high COVID-19 cases and hospitalizations in Oregon over the past month and created additional uncertainty for many tenants.

The United States Census Bureau estimated in its most recent household pulse survey that 9% of Oregon renters are behind on rent payments, and 17% have little or no confidence that they will be able to pay next month.

Harris is one of those tenants. He says he feels lucky to have received the county help he needed to stay home this summer, but worries another eviction notice will come in if he doesn’t find a job soon. fulltime.

â€œI’m afraid I’m in a homeless camp,â€ Harris said. â€œI’m very worried, but for me just stressing about it isn’t going to make a dent. I just have to think positively and hope something happens. “

Tenants who have received a court summons regarding an eviction case can call the Eviction Defense Project at 888-585-9638 to seek legal help or send an email [email protected]. Tenants can also call 211 to learn more about rental assistance programs and to be put in touch with Bienestar de la Familia case managers.

Tenants who have received eviction notices must apply for rental assistance, provide their landlord with proof that they have made the request, and attend all scheduled court hearings.