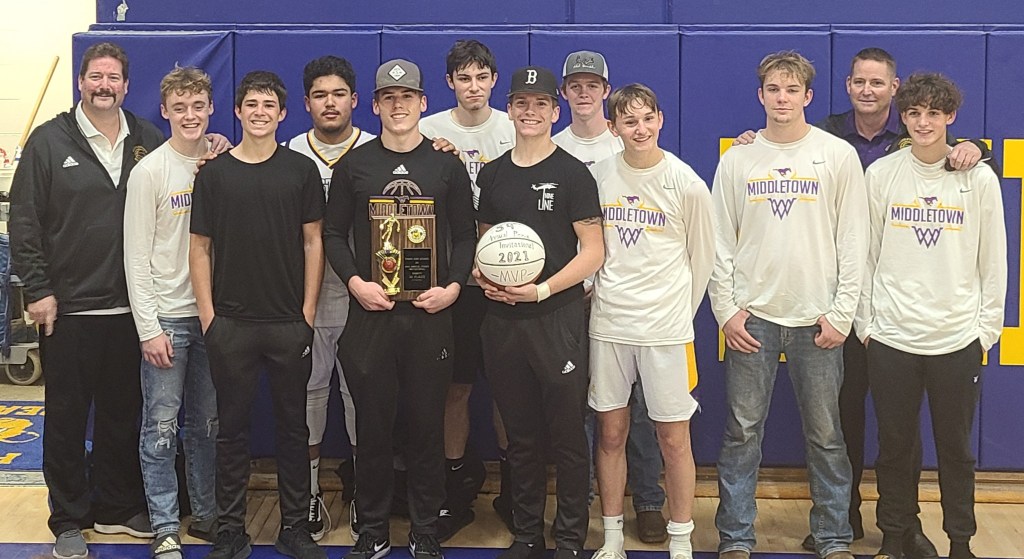 Led by 14 points from tournament MVP Cole Ketchum and 11 points each from Lucas DaCosta and all-tournament selection Brody Breeden, the Mustangs overcame a tough night with the ball to beat Dixon 52-41 in the tournament championship game at Arbuckle.

“I’ve been in the final two or three times but never won,” said Rockwell. “It’s exciting, especially for the seniors.”

Middletown (3-0) were 14-3 back in the first quarter and Rockwell said the problem was easy to diagnose.

“If we jump off the Brooklyn Bridge, we couldn’t fall into the water,” he said of the team’s missed chances. “I think we missed 10 layups in the first quarter.”

Middletown fought their way back to only 15-11 by the end of the period. While the Mustangs didn’t exactly fire from the field for the last three quarters, they hit enough shots the rest of the way and let their defenses take over from there.

“Our defense started after that first quarter and we just worked it out and played the games when we needed them,” said Rockwell.

Middletown led at halftime by 23:19 and went into fourth quarter with 39:29. The Mustangs were still up 10 with less than three minutes ahead when Dixon hit consecutive 3-pointers and got within three points.

“We did a layup to make five, then we got the ball back and Luke hit a big 3 to put it away,” said Rockwell of senior guard Luke Hoogendoorn who played Ketchum and Breeden in the all-tournament Team joined.

“He did all the little things for us that you have to do to win a game like this,” said Rockwell of Hoogendoorn. “He played really well.”

“Tell you what, this is a growing game for these guys,” said Rockwell. “They could have given up in several places, but they didn’t. I’m really proud of the way they struggled. They are fighters. ”

Middletown welcomes Lower Lake in the North Central League I opener for both teams on Tuesday evening.

In other boys’ tournaments on Friday:

At Lakeport, pushed to the position of point guard because of an injury to Jake Soderquist, Clear Lake senior Ethan Maize seems to be adjusting quite well in his first two games for the Cardinals. On Friday he led the team with 22 points, including four 3-point points, in a first-round win over Vacaville Christian in the Round-Robin Larrea Memorial Tournament.

“We had a really good first half, played a good defense, messed everything up,” said Damiata. “We were focused tonight and played with a lot of confidence.”

Clear Lake led 17-5 after the quarter and 35-17 at halftime. The Cardinals were able to easily negotiate a third quarter in which they only met in the last two minutes of the quarter. Even so, Vacaville Christian was only able to reduce the Cardinals’ lead by two points before the fourth quarter.

“We didn’t turn the ball and give them easy points,” said Damiata.

Clear Lake only committed five ball losses and only one in the second half.

“Daskam was a beast,” he said of the senior’s 11 rebounds.

Wind also came off the bench to hit a pair of 3-pointers.

Maize has 41 points in his first two games.

“We improve every time,” said Damiata. “The boys are excited.”

Clear Lake had a 10-point lead at halftime before running into foul problems in the third quarter. Vacaville Christian took control of the game with a run at the start of the final period.

In Upper Lake, which had declined by up to 24 points in the second half, the Kelseyville Knights closed with three minutes from time to eight minutes before St. Bernard before they beat the Crusaders in a second round game at the Round Robin Cougars Small Schools fell classic.

Kelseyville is 0-2 in tournament play and 0-3 in the season. The Knights play Willits on Saturday at 3 p.m., also 0-2 in the tournament game.

“They’re a really good team,” said Kelseyville head coach Oscar Lopez of the Crusaders, who averaged six feet on their starting grid, including 6-foot-7 junior center Owen Shanahan. “They injured us in the first half with a lot of putbacks in the offensive lens.”

Saint Bernard (3-0) can also shoot the 3-pointer. The Crusaders beat in nine Treys, but Kelseyville made them a better one with a straight 10, five from Luke Watkins (22 points) and four more from Jake Keithly (18 points).

“We hung out with them pretty well,” said Lopez. “We molested her all night. I don’t think they ever felt comfortable. ”

Lopez said he also received solid play from one of the smallest players on the floor, Adolpho Arias. He finished with eight points.

“Adolpho played a great game,” said Lopez. “He fought against their greats.”

After Kelseyville had reduced St. Bernard’s lead to eight points in the final minutes, the Crusaders dropped the game.

“You hit a couple of daggers,” said Lopez.

St. Bernard defeated Willits 75-41 in the first round on Thursday.

In Upper Lake, the Upper Lake Cougars went into fourth quarter 36:32, but the Willits Wolverines rallied for victory in the second round of the Cougars Small Schools Classic.

Both teams are 1: 1 in the round robin competition. The cougars are 1-2 in the season.

“It’s definitely up to me,” said Upper Lake head coach Miles Hayes of his team’s game. “I didn’t make the adjustments. It’s up to me, not them. ”

Hayes said Blaine Rhodes’ solid play on defense was a ray of hope for the Cougars.

“Sammy is the heart of this team, but Blaine is one of those glue. He doesn’t get all of the awards that other guys like Sammy and Kai get, but he allows them to do what they do. ”

Upper Lake closes the tournament game on Saturday against St. Bernard’s of Eureka, which after beating Kelseyville on Friday 2-0 in tournament action.

At Lakeport, the Fort Bragg Timberwolves defeated Lower Lake in the first round of the Larrea Memorial Tournament Round-Robin, leaving the Trojans 0-2 that season.

The score and other game details were not reported to the record bee.