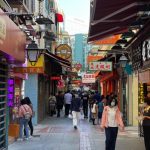 Im In a recent written inquiry to the Legislative Assembly, lawmaker José Maria Pereira Coutinho questioned the government on the internationalization of the city’s tourism source market.

Coutinho pointed out that in the most recent national development plan, Macau is positioning itself as a global tourism and leisure center and needs to internationalize its source market in order to achieve this position.

He added that this goal is understood as an indispensable step to foster the economic diversification of the city and benefit local residents.

In addition, he underlined that within the framework of the five-year plan of the city covering the years 2016 to 2020, 22 specific objectives, which would eventually converge into seven broader objectives, should be achieved by the end of the half-decade. .

Among these objectives are the strengthening of regional cooperation and the exploration of international exchanges. The latter is embodied in the construction of the “three centers” facilitating interactions between China and the Portuguese-speaking countries.

On the basis of these forward-looking statements, the legislator asked the government how much it had already achieved during these five years in terms of market diversification and internationalization, and what measures would be adopted to achieve these objectives.

Coutinho also asked about the progress of regional cooperation, economic diversification and labor market expansion. In addition, he questioned what the government would do in the years to come, up to 2025, to achieve the unreached goals.

On the other hand, Coutinho’s ally, lawmaker Che Sai Wang, has asked the government for additional financial subsidies for small traders in an economy struggling to recover.

He began by saying that local residents expected the government to provide more financial relief, given the uncertainty surrounding any potential recovery led by the casino industry.

Che cited press reports suggesting that a flea market economy is emerging in mainland China. A freelance saleswoman uses the trunk of her car to sell objects and toys in Zhengzhou, Henan Province, managing to earn RMB 1,000 per day. She also has a full-time job.

Che also recalled that immediately after the handover, the government allowed shop sellers to operate in a manner similar to flea market sellers.

The lawmaker suggests that the government allow such business practices on special occasions so that vendors can sell local souvenirs, artifacts, food and drink, and other locally made goods.

He also asked the government how it would provide more amenities to individual homeowners who wish to conduct flea sales, in addition to the financial support it would provide to business owners in traditional civic shopping districts, such as the Red Market.