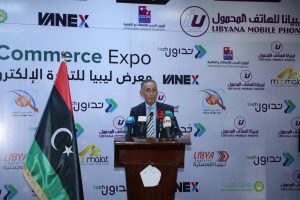 Mohamed Hwej, Minister of Economy and Trade (Photo: Archives of the Ministry of Economy).

Libya called on the international community to support its security and financial stability by lifting the freeze on its funds abroad and helping it develop the services sector. The call was made by Libyan Economy and Trade Minister Mohamed Hwej in an interview with Al-Jazeera Mubasher.

According to the summary of the interview released yesterday by the Ministry of Economy and Trade, the Minister said that his government has started its work by unifying its affiliated institutions and drawn up a plan to improve the level of per capita income and to raise the quality of services in all regions

The Ministry of Economy and Trade, after completing the unification of its affiliated institutions, was keen to develop an action plan that would help diversify the national economy and raise the level of national product for non-exports. oil companies.

Achieving the citizen’s food security is one of the priorities of the ministry’s work in the current period and starting to build up a strategic stock of cereals and basic products.

The lack of budgetary approval has had a significant impact on the work of the government, especially with regard to development and infrastructure development in the country.

The minister said his ministry has started working on creating special zones and activating transit trade by exploiting the geographical location of the Libyan state.

The ministry has prepared the investment map, which aims to activate and develop all industrial and agricultural sectors and harness the resources available in all regions to achieve economic diversification in partnership with the local and foreign private sector.

Hwej said he looked forward to the implementation of the government’s plan for reconstruction, with the participation of friendly countries, and for the development of the oil, energy and investment sectors.

The Minister said that his government is working to activate the contracts and agreements reached in the areas of development and reconstruction and to implement investment projects according to the priorities of the stage.

He insisted that 70% of oil revenues should be used for development, infrastructure development and implementation of investment projects to achieve the desired goal.

At the end of last year, he added, the government actually started activating the investment industry, as more than 140 investment projects were signed in various regions.