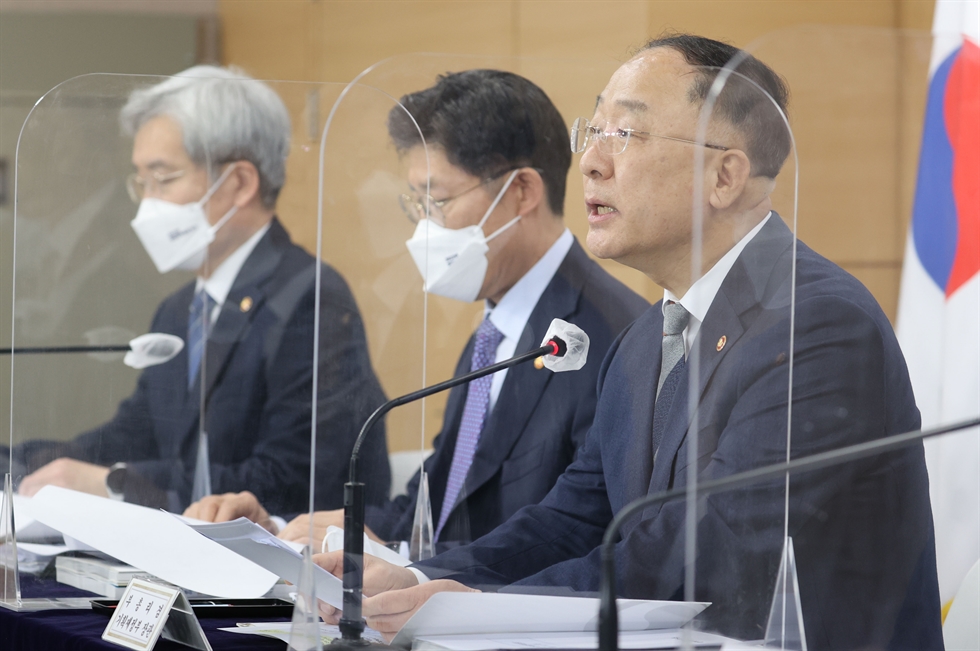 The government will continue to maintain its expansionary fiscal policy next year, in order to provide the impetus for an economic recovery in the first half of the year by taking 63% of the huge annual budget of 608 trillion won ($ 509.8 billion ), the Ministry of Finance announced on Monday.

The move is part of the 2022 policy guidelines unveiled by the Ministry of Economy and Finance, aimed at boosting growth and revitalizing Asia’s fourth-largest economy, which has been supported by exports.

As part of this plan, the government will prioritize supporting the recovery of domestic demand by expanding tax incentives for credit card use and expanding coupon programs. Another focus will be on ensuring green and innovative growth by spending up to 33.1 trillion won in related sectors, including companies that advance the environment and carbon neutrality.

“We announced three major measures to support small business owners last week,” Deputy Prime Minister and Finance Minister Hong Nam-ki said Monday during a press briefing at the Seoul government complex. “The exercise has not yet started and swift execution is the top priority.”

Logistics issues faced by exporting companies will be addressed promptly and resolved through frequent and results-oriented discussions through a variety of channels involving stakeholders, an open and productive process to reduce the fallout from ongoing disruptions in the chain global supply.

Risk management will also be improved overall through tighter monitoring of household debt and fragile-financial enterprises, while emergency measures will be designed and strengthened to protect small and medium-sized enterprises from bankruptcy. and curb inflation.

“Korea’s recovery from the pandemic next year will be the fastest among major developed countries,” Senior Vice Minister of Strategy and Finance Lee Eog-weon said at a press briefing. at the Sejong Government Complex on December 17th.

â€œConcerns persist about internal and external uncertainties as well as the livelihoods of the population, especially low-income vulnerable groups. Among the most serious are the soaring cost of living and the polarization of income. “

The finance ministry predicts the country will grow 3.1 percent in 2022 after expanding 4 percent this year. He expects consumer inflation to hit 2.2% next year after peaking at 2.4% in 2021.

Up to 50% tax credit will be granted to companies that invest more in the development of what the government calls â€œstrategicâ€ technologies. The cap will be 40% for those investing in technologies related to net zero carbon emissions.

In February next year, the government will nominate 65 technologies, the developers of which will receive increased benefits for investment in research and development as well as in facilities. Developers of semiconductor, battery and vaccine technologies will be eligible.

The government will spend 115 trillion won on implementing state-run projects and strengthening private investment next year, up from 110 trillion won this year. A total of 261 trillion won in financing will be made available to exporting companies, mainly medium-sized enterprises, up 5,000 billion won from this year.

The government will continue its efforts to expand the global free trade network, in order to help local businesses gain a foothold and gain a greater presence abroad before the Regional Comprehensive Economic Partnership (RCEP) which is due to come into effect in February of next year. The country is also seeking to join the Comprehensive and Progressive Agreement for Trans-Pacific Partnership (CPTPP) which also reinforces the need for a greater global position.

A low-interest fund of 35.8 trillion won will be provided to struggling small businesses, and their payments of taxes, rent and utility bills will be delayed for another three months.

National and external risk management will be strengthened, under the control of a working group set up to implement an early warning system for more than 4,000 key export and import items.

Two hundred items will be designated as key strategic items, for which local manufacturing and storage will be expanded. Global cooperation will be continued with suppliers of products for diversified supply channels.

Household debt and financially unsustainable businesses will be closely monitored. The government will limit annual household debt growth to a maximum of 5%, as managed by the debt service ratio (DSR), which is stricter compared to previous lending rules based on the debt / debt ratio. income (DTI) and loan-to-income ratio. value ratios (LTV).

Bold plan saved the global economy in 2009. With this new plan, we can control Covid | Gordon brown