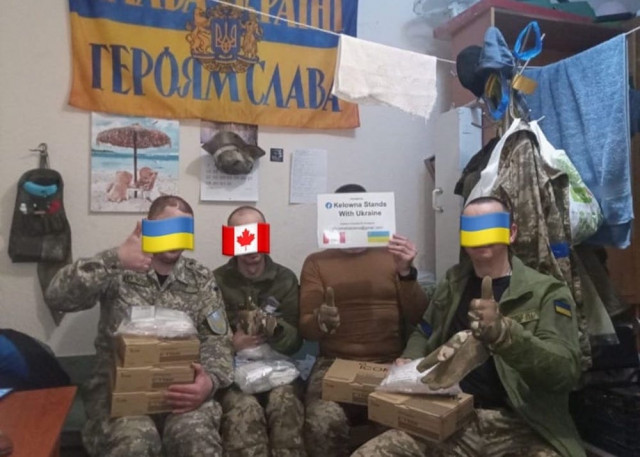 A Ukrainian man reached out to residents of Kelowna to thank them for donating supplies that recently arrived in Ukraine.

Valeriy Payevsky, a Kyiv resident, posted on the Kelowna Stands With Ukraine Facebook page on Saturday morning an overview of Kelowna’s destination for donations in the country.

“On behalf of all our heroic defenders and the people of Ukraine, we express our deep respect and sincere gratitude,” Payevsky said.

“All this makes us strong, helps to keep courage and faith in our faster victory in the fight for truth, light and our independent country! Glory to Ukraine! Glory to the heroes!”

Payevsky also posted a number of photos showing the new supplies in the hands of Ukrainian soldiers, alongside “Kelowna Stands With Ukraine” signs.

He says medicine has been sent to a “special medical battalion” which prepares first aid kits for Ukrainian soldiers.

“With the help of the provided equipment, our military’s operations are very successful in countering enemy attacks,” Payevsky said.

Last month, 30 sets of walkie-talkies previously sent from Kelowna were sent to sniper and scout groups in Bucha, Irpen, Gostomel, Boryspil and other areas around Kyiv and Kharkiv.

“Such an incredible step has greatly accelerated the arrival of all necessary help to the first line of defense,” Payevsky said.

“We believe that our victory is near, but, unfortunately, the enemy does not stop its attacks on our country, so the question of the need for assistance and equipment still looms large for the Ukrainian army.”

Those interested in supporting Kelowna Stands With Ukraine can send money by e-transfer to [email protected]or cash can be dropped off in person at Norm Letnick MPP’s office at Highway 33 and Asher Road in Rutland.

Kelowna’s support is being felt in Ukraine, after a local organization raised $250,000 to help the country fight Russia.

Recent video taken in Ukraine’s disputed Donbass region shows a “Kelowna Stand With Ukraine” sign on the dashboard of a vehicle following a military vehicle through the streets.

Danylo Sora, one of the directors of Kelowna Stands With Ukraine, posted the video on the organization’s Facebook page on Friday, along with a letter from the town hall of Borysbil, Ukraine, thanking Kelowna for its support.

“Anything useful on the front line,” Sora said. “I only do military stuff, to save the lives of our soldiers and help them win this war as soon as possible.”

Sora, who was born in Ukraine and has lived in Kelowna for seven and a half years, works with a close friend of his in Ukraine. This friend distributed the supplies to different military units in need across the country.

“If you deliver it directly to the person yourself, it’s much faster and more efficient,” Sora said.

While his friend cannot leave Ukraine because he is under 60, Sora met a 64-year-old man in Warsaw who was able to bring the supplies back to Ukraine. This man is also a resident of Kelowna, and he flew to Ukraine to help with the war effort just days after the Russian invasion began.

While this was Sora’s first time delivering supplies himself, Kelowna Stands With Ukraine has previously sent supplies along with others who have traveled to the country.

“I hope the war will end, but if not, I hope to be able to go back in the next two weeks with the things needed to help,” Sora said.

Sora says Kelowna Stands With Ukraine raised about $250,000 to buy supplies for the people of Ukraine, but he notes donations have dwindled over the weeks.

Those interested in supporting the cause can send funds via wire transfer to [email protected], or cash can be dropped off in person at Norm Letnick MPP’s office at Highway 33 and Asher Road in Rutland. Those interested in helping can also contact Sora at 250-899-7747.

Letter of thanks for Kelowna stands with Ukraine from Borysbil City Hall.