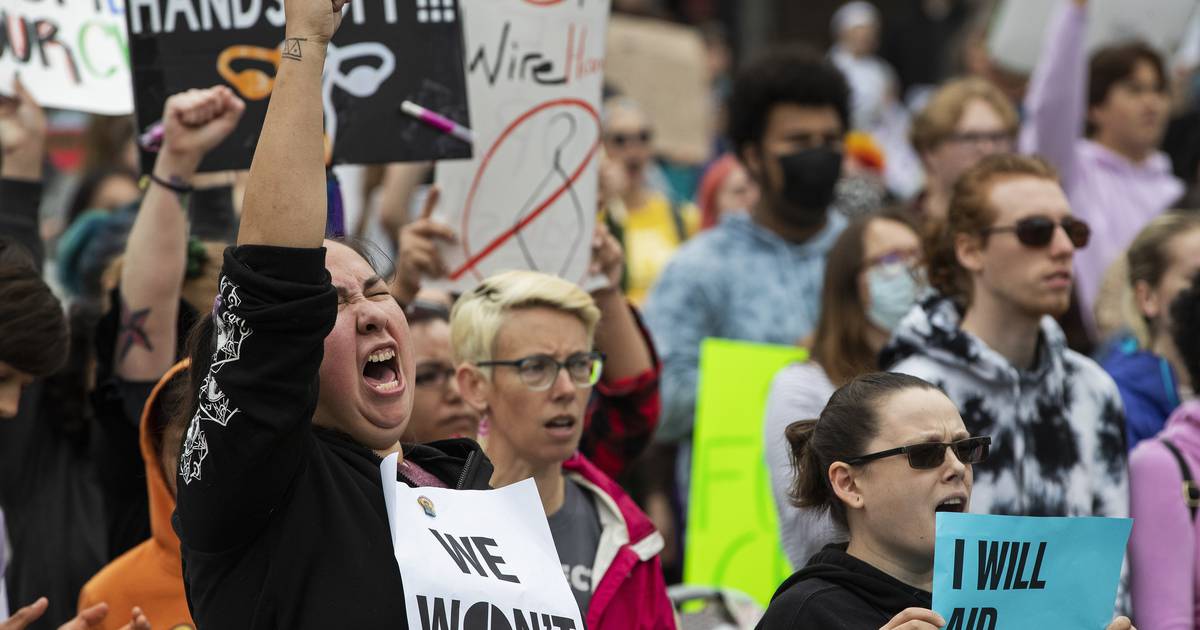 Hundreds of people marched through downtown Anchorage Friday and Saturday as they rallied in support of abortion rights after the Supreme Court struck down Roe v. Wade, allowing states to ban abortion and remove protections provided by the US Constitution.

“It is unacceptable that we have lost the right to have legal abortions in this country,” Laura Grande said as she waited for the start of Saturday’s march at the Delaney Park Strip. “My Body My Choice” was written on her stomach in black paint. “If all I can do is go out and walk and sing and paint my belly… I’ll try as hard as I can.”

Saturday’s abortion rights rally and march was organized by the Anchorage Socialism and Liberation Party and the nonprofit Stand Up Alaska. It came as supporters of women’s reproductive rights rallied in other communities across the state and country, and followed a Friday rally that began in Town Square Park.

After Roe, access to abortion in Alaska remains preserved under the state’s constitutional privacy protections and Alaska Supreme Court rulings. But in November, voters will be asked to decide whether a constitutional convention should be called — the first step on what abortion opponents see as the likeliest path to potentially amending Alaska’s Constitution to allow for a statewide ban.

Cynthia Gachupin, event planner and member of PSL, said they started planning Saturday’s rally about a month ago, after learning about the Majority Opinion Project leak. Gachupin said other events were also planned for future dates.

Fifteen-year-old activist Denali Gamache said she became involved in the movement after her mother found out she was being sexually abused by her father. Gamache was one of the speakers on Saturday.

His words stopped as hundreds of people chanted, “We’re going to vote.”

“I think it was really important because we have to be united in what we want and what we need,” Gamache said. “Because if we don’t have that, then other people are going to win.”

“I have six children who were fathered by two different rapists,” she said. “So when I heard about the Dobbs vs. Jackson decision, which overturned Roe vs. Wade, all I could feel was instant fear because if I were to get pregnant again against my will, I would would have no recourse.”

Natasha Gamache, community organizer with Stand Up Alaska, called for solidarity and unity. She, along with other speakers, urged people to vote ‘no’ on whether a constitutional convention should be called.

Sydney Burns attended the rally and handed out information leaflets to those present. Burns is a nurse and works in health education and said she wanted to share her knowledge about reproductive health.

Burns has created a working resource document that provides general information about abortion rights and access. The pamphlets she distributed also included a QR code to a Facebook group aimed at creating a self-help network for community members to support those trying to access abortion.