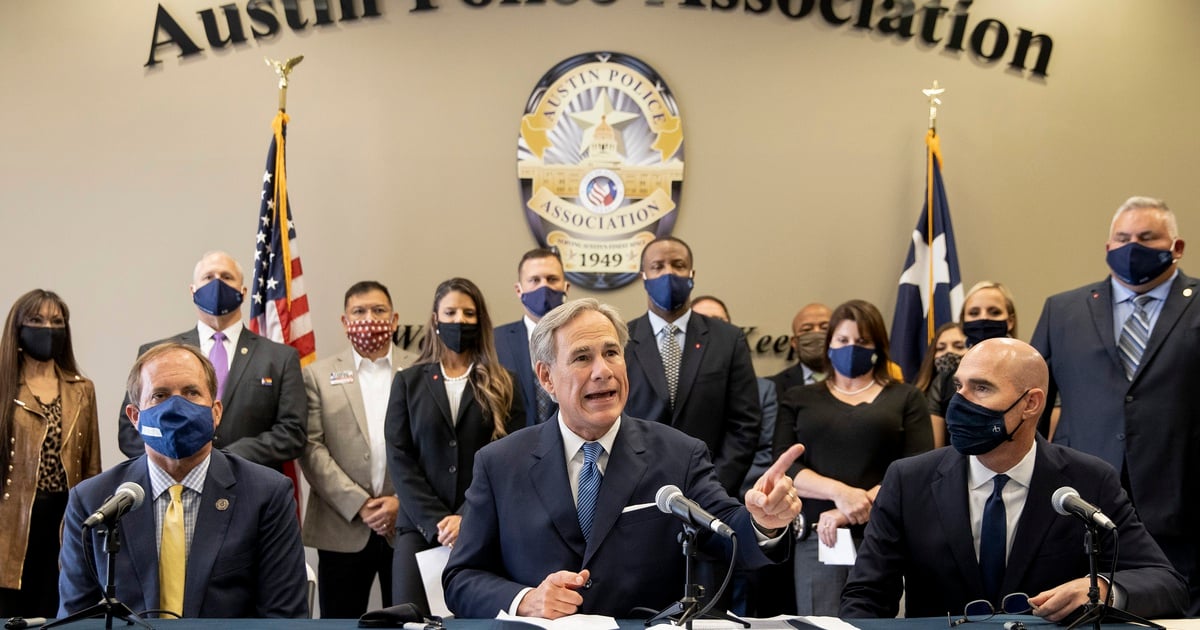 Sign up for The Brief, our daily newsletter that keeps readers up to date with the most essential news from Texas.

Gov. Greg Abbott launches an attack ad targeting Beto O’Rourke, claiming the Democratic challenger wants to pull funding from the police. But O’Rourke’s campaign says the claim is not true.

In a 30-second television ad due to launch on Monday, Abbott appears in front of footage of a crime scene, with police cars and red and blue lights in the background. The Houston Chronicle reports Abbott’s campaign spent $4 million to run the ad statewide.

“Across America, there are too many scenes like this. Beto O’Rourke’s response is to defund and dismantle the police. He wants to punish the police, not the criminals,” Abbott says in the ad. “I support our law enforcement by ensuring they are fully funded.”

The attack announcement is based on O’Rourke’s comments on a June 2020 podcast – at the height of the Black Lives Matter movement when demonstrators flooded the streets to protest police brutality.

“I really love that Black Lives Matters and other protesters have brought this to the fore to defund these items that have over-militarized our police and instead invest that money in the human capital of your community, make sure you have the services, the help, the support, the health care needed to be well and not require police intervention,” O’Rourke said. “And then also in some necessary cases, completely dismantling those police forces and rebuilding them.”

O’Rourke also said on the podcast that he approves of the Minneapolis City Council decision redirect $8 million from the police budget to violence prevention and other city services. A spokesperson for O’Rourke’s campaign said O’Rourke specifically referenced Minneapolis, not Texas, in the podcast.

At a July town hall in Pecos, West Texas, O’Rourke was asked about his stance on defunding law enforcement.

“I disagree with you on defunding the police,” O’Rourke told the attendee. “I want to make sure we can rely on the police and that means making sure they have the resources and the funding they need, the training they need.”

Chris Evans, Beto’s campaign spokesman, said O’Rourke repeatedly voted to increase the police budget as a member of the El Paso City Council and as a congressman. democrat.

Since the 2020 protests, Abbott and other Texas Republicans have taken aim at calls to “defund the police,” a slogan the lawyer says can mean anything from redirecting money to law enforcement toward programs that address the root causes of crime to fully suppress policing. After the 2021 legislative session, Abbott signed legislation that would punish cities in Texas and other jurisdictions if they cut funding for law enforcement.

In Abbott’s campaign announcement, the governor said he has deployed more law enforcement to crime hotspots and kept violent criminals off the streets. But Evans argued that violent crimes such as murders has increased statewide since Abbott took office.

In previous ads, Abbott’s campaign called the Democratic nominee “Wrong Way O’Rourke,” highlighting comments in which he veered left. A campaign announcement from 2021 manipulated and modified O’Rourke’s comments on policing to make his radical position appear.

“He clearly continues to run more to the left and he stands on the far left of his party to this day,” Abbott campaign spokesman Mark Miner said in November 2021. “Now he will try to reinvent himself, but he can’t run away from his past.

Abbott’s campaign did not immediately respond to a request for comment.

Both campaigns are stepping up their publicity as the gubernatorial race enters the home stretch. O’Rourke aired his first general election TV ads late last month to mark the effective date of the “trigger law” that bans nearly all abortions in Texas. He has earmarked $10 million in airtime for ads this week, the contents of which he has yet to disclose.

Earlier this summer, Abbott’s campaign unveiled plans to spend at least $8.8 million on television in the fall, plus $2.75 million on Hispanic media. So far, these ads have focused on portraying a positive image of the incumbent governor, rather than targeting O’Rourke.

The full program is now LIVE for 2022 Texas Grandstands Festival, which will take place September 22-24 in Austin. Explore the timeline of over 100 insightful conversations coming to TribFest, including the inside track on the 2022 election and 2023 legislative session, the state of public and higher education at this point in the pandemic, why Texas suburbs are booming, why broadband access matters, the legacy of slavery, what really happened in Uvalde and much more. See the program.