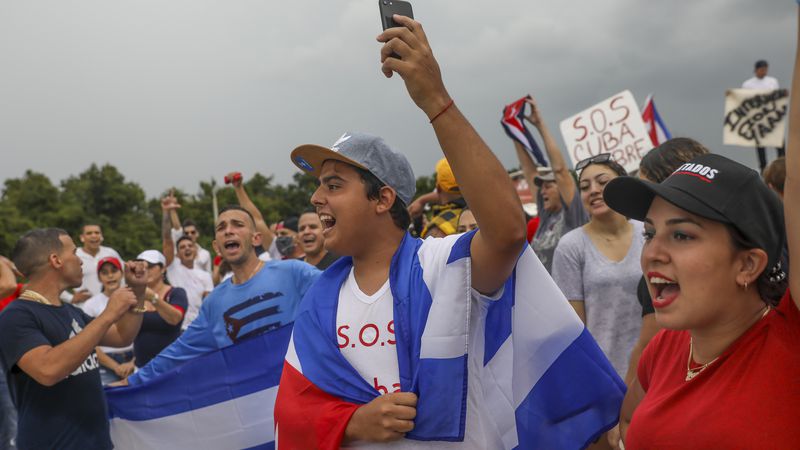 For four days, the Florida Democratic Progressive Caucus deliberated and drafted a statement in response to historic anti-regime protests in Cuba.

On Thursday, the organization made public its position. The statement did not include support for the protests or a call for violence by the Cuban military and police. Instead, he focused on a call to end the US embargo.

â€œThe DPCF demands the one thing the United States has the power to do right now that we know will immediately and measurably improve the lives of the suffering Cuban people on the island: President Biden, raise the Cuban embargo now! says the organization.

Michael Calderin, a Cuban American who is chairman of the Florida Progressive Caucus, said support for the protests and condemnation of police brutality were not included in the statement “because we didn’t think it was necessary.”

â€œI would like to think that the declaration is very focused on what we can do to help the Cuban people,â€ Calderin said. â€œIt must be number one. I understand our approach there is a little different from most. “

Manny Diaz, a Cuban American who is president of the Florida Democratic Party, said the state party had not been consulted or made aware of the Progressive Caucus statement.

The divide between Democrats over Cuba last week cuts three paths. Elected South Florida Democrats have urged President Joe Biden to do more and use the protests to show Cubans the US commitment to human rights and democracy. Progressives have called for an end to the embargo and criticized the United States’ long-standing opposition to Havana – while largely ignoring the street protests and the violent crackdowns in response. And the White House occupies common ground, condemning violence against protesters but continuing to say policy changes are under consideration.

“This is a missed opportunity by this group of Democrats to make it known that while they oppose the US embargo against Cuba, they also condemn the heinous treatment of Cuban communist leaders against the multiracial coalition of Cubans, young and old , who have never done this before, â€said Mike Hernandez, Democrat strategist and analyst at Spanish-language Miami-based Telemundo 51.

The Florida Progressive Caucus statement came a day after the national organization Black Lives Matter released a statement that did not express support for the protesters, many of whom are Afro-Cuban, facing brutal crackdowns from the military and police forces.

â€œThe Cuban people are being punished by the US government because the country has maintained its commitment to sovereignty and self-determination,â€ the group wrote on Instagram. â€œAmerica’s leaders have been trying to crush this revolution for decades. Instead of international friendship, respect and goodwill, the US government has only brought pain to the nation’s 11 million people, 4 million of whom are black and brown.

The Black Lives Matter statement ignored the three-year-old San Isidro movement, a collective of artists – many of whom are black – who advocate free speech on the communist island. Their hunger strikes last year were a prelude to much larger protests across the country, and the song â€œPatria y Vidaâ€ (â€œHomeland and Lifeâ€) was part of the San Isidro Movement’s efforts to challenge the diet.

The song, which was produced and sung by a majority of black artists in Cuba and abroad, challenged the revolutionary slogan of the Castro regime, â€œPatria o Muerteâ€ (â€œHomeland or Deathâ€).

Cuban-American Democratic pollster and consultant Fernand Amandi said that “the shameful and mistaken words in Black Lives Matter’s statement hurt the larger Black Lives Matter movement, which many of us support and continue to support.”

Democratic State Representative Omari Hardy, a self-identified progressive from West Palm Beach who has expressed public support for lifting the embargo after Sunday’s protests, did not criticize Black Lives Matter but said he ‘it was important to call the police violence in Cuba.

â€œI know my values â€‹â€‹and values â€‹â€‹demand that I call out oppression when I see it,â€ said Hardy, who is running for Congress in a district that spans Broward and Palm Beach counties. “I will be consistent and speak out against police brutality and oppression wherever it occurs, this goes for the police brutality and brutality that Cubans suffer at the hands of the regime there.”

But he also said much of the criticism from groups like the Florida Progressive Caucus and Black Lives Matter on Cuba came from individuals who did not speak out during widespread protests in the United States last year.

“I don’t want to hear from Republicans or moderate Democrats who didn’t take to the streets with the Black Lives Matter protests last summer that progressives and Black Lives Matter don’t speak forcefully enough about oppression in a other country, â€Hardy said. “They recognize the brutality and oppression in other countries better than they can recognize in their own.”

The division continues between the Democratic Party in Cuba. Prominent Democrats outside of Florida have expressed support for ending the Trump-era embargo and sanctions following protests as each of the state’s 10 Democrats in Congress signed a bipartisan resolution condemning violence. The resolution was co-authored by Rubio, Republican Rep from Miami Mario Diaz-Balart and Democratic Rep from Miami Debbie Wasserman Schultz. And the words of left-wing groups like Black Lives Matter and the Florida Progressive Caucus are turning into fuel for Republican attacks a year after Democrats had bad results with Cuban-American voters in South Florida.

“The Biden administration is wasting a historic opportunity to defend freedom and human rights in our home region,” former President Donald Trump said in a statement Thursday. “I fought for Cuba, not them.”

Hernandez said Democrats should treat the situation in Cuba as a humanitarian crisis and that the Biden administration should quickly allow funds to be sent from the United States to Cuba while making a public offer of COVID-19 vaccines.

“I think the frustration with the statement by the Progressive Democratic caucus and the wait-and-see approach of the Biden administration is a political party trying to figure out how best to solve this problem when it’s not even about votes, it’s a humanitarian problem, â€Hernandez mentioned. “Make sure [the people] access remittances, offer the Cuban government access to vaccines. Force the regime to show the world that they are heartless bastards if they reject life-saving vaccines.

And Amandi said Democrats should only listen to protesters in Cuba as they consider how best to respond to the loudest cry for democracy in a generation.

“The best way to explain the position is to listen to what the courageous Cuban protesters on the island are saying to each other, which is not a call for an end to the embargo or for more vaccines but an end to the Castro regime that has failed them and their families for over 60 years, “Amandi said.” This is who we should be inspired by. “