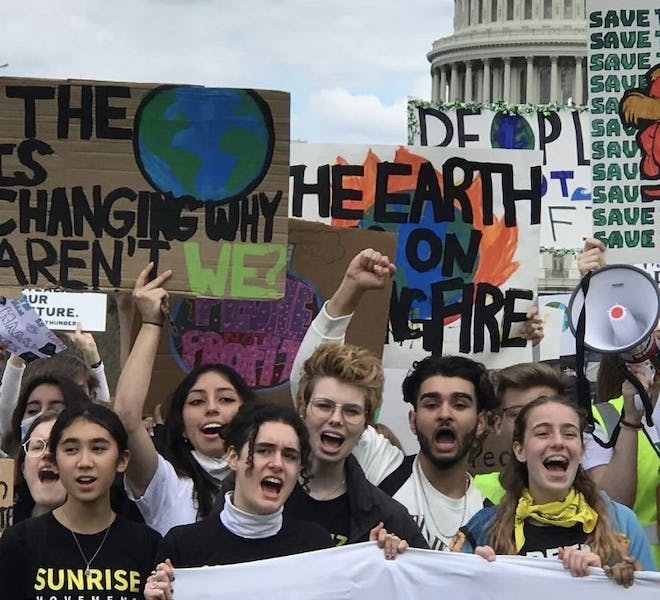 On September 29, the University issued a statement announcing that it would divest from 90 fossil fuel companies. The announcement came just days after Divest Princeton’s first protest of the year, held on September 23 as part of the Global Climate Strike. The announcement invigorated many longtime Divest activists as they looked to the future of climate activism on campus.

A key part of that future? Freshmen, who had only been on campus for a few weeks before the University’s announcement. Despite the short time frame, many of these students had already become involved with Divest Princeton. Some, like Eleanor Clemans-Cope ’26, even gave speeches at the September 23 protest.

“I’m Eleanor Clemans-Cope, I’m a freshman, and like all of you, I’m sick of Princeton’s support of fossil fuel companies and the active destruction of our planet,” she said. shouted over the wind.

Clemans-Cope is an opinion columnist for The Daily Princetonian.

It didn’t take long for those early years to get involved – leading songs, organizing their peers, and delivering speeches demanding the University divest from fossil fuels. For many of those early years, joining Divest Princeton was just the latest step in a long-standing commitment to climate activism. Today, members of the Class of 2026 bring their past experience in local and national organizing and bring new energy to campus advocacy.

For Davi Frank ’26, getting involved with Divest Princeton seemed like a natural next step.

“I’ve done a lot of climate activism before. I was the head of my school’s environmental club and organized through Sunrise [Movement] and Youth Climate Movement at various times,” Frank said.

Alexander Norbrook ’26 described his own experience with the Sunrise Movement as “transformative”, despite the restrictions of COVID-19 protocols throughout his involvement.

“When I was in high school, I saw that the most urgent and effective way to make a difference was to be at the state level of Maryland and the city of Baltimore,” Norbrook said. “[In Sunrise Baltimore] there are a lot of national resources and national support, as well as the organization of national coalitions.

Get the best of ‘the prince’ delivered straight to your inbox. Subscribe now »

Norbrook, like Clemans-Cope, contacted Divest Princeton last summer, hoping to get involved in the organization’s efforts.

Beyond Divest Princeton, Norbrook hopes to join other groups on campus that promote climate activism.

“I plan to join some sustainability policy organizations, as well as the garden club… [where I can] connecting myself to nature in a way that is perhaps more literal and reciprocal,” Norbrook said.

Many of these freshmen noted that involvement in climate activism at Princeton required them to adjust their mindset about what organizing and protesting looked like.

Many of the “high school rules” that Frank refers to present enormous challenges for students who want to organize protests. Walkouts, a common form of student activism, often violate school policies, and many students risk suspension or disciplinary action for participating. In college, however, students often have much more freedom to skip class, express their beliefs, and seek support from their professors and peers.

Other students commented on the change in specific goals of climate activism when transitioning from high school to college. Those involved with Sunrise noted that their past experiences tied into broader climate policy, while coming to the University meant feeling compelled to focus on divestment.

“[For Sunrise Baltimore,] the horizon is broader because it is all climate policy, rather than Divest, that is more focused and can be more divisive,” Norbrook said. “I think the goal of Sunrise versus Divest is very different. Divest is a climate justice organization, and they work beyond just divestment, but their main goal is to get Princeton to pull all of their money out of fossil fuels. and to disassociate themselves from it completely.

Former students stressed the importance of involving first-year students in militant movements at the University. Serianni, speaking on behalf of Divest Princeton, outlined the group’s goals of creating a cohort of students from all parts of the Princeton community.

“[First-years] will be here for four years. [Divest] will be here much longer than Princeton realizes. Continuity is key for Divest Princeton to have lasting change,” Serianni said.

Equipped with lessons learned from their previous efforts, these first years have specific tactics they hope to deploy during their time here.

Frank, for example, hopes to create a climate alliance group within the Center for Jewish Life (CJL). Frank and another freshman, Raphaela Gold ’26, have already garnered on-campus support for this group, which would operate as an offshoot of the Jewish Youth Climate Movement. Frank and Gold hope to promote sustainability through various initiatives, including cleaning up litter around Lake Carnegie, implementing composting in the dining room, and creating a climate action plan for CJL.

Gold is a feature contributor for the “Prince”.

“I think this problem [of divestment and climate activism] is an issue that applies to every student at this university,” Frank said, “even if they are not people who write reports, organize activism or are activists. It’s something they should care deeply about and take action on.”

Clemans-Cope hopes to get his message across through “disruptive activism.” She noted that she has already been arrested twice for acts of civil disobedience while demonstrating for action against climate change.

“I am engaged in disruptive activism. I believe that in all civil rights movements and in all justice movements, disruptive activism is an essential piece of the puzzle,” Clemans-Cope said. “I myself have been arrested twice for climate-related civil disobedience. So things like [protests]it’s what we do to get our message out and to get politicians to listen and to get people into the movement.

Norbrook echoed his sentiments, saying he’s “excited to be a more disruptive voice and presence” as part of Divest Princeton.

After the University’s announcement on Sept. 29, these freshmen said they came away energized — ready to continue the fight and get more creative with their methods of doing so.

“The main takeaway from [the announcement] is that activism works. As Frederick Douglass said, “power concedes nothing without demand,” Clemans-Cope wrote in a statement to the “Prince” after the announcement. creating good problems is how you do good things.”

Sophie Glaser is a news and features contributor, as well as a copy editor for the ‘Prince’, she can be contacted at [email protected] or @SophieMGlaser on Twitter.