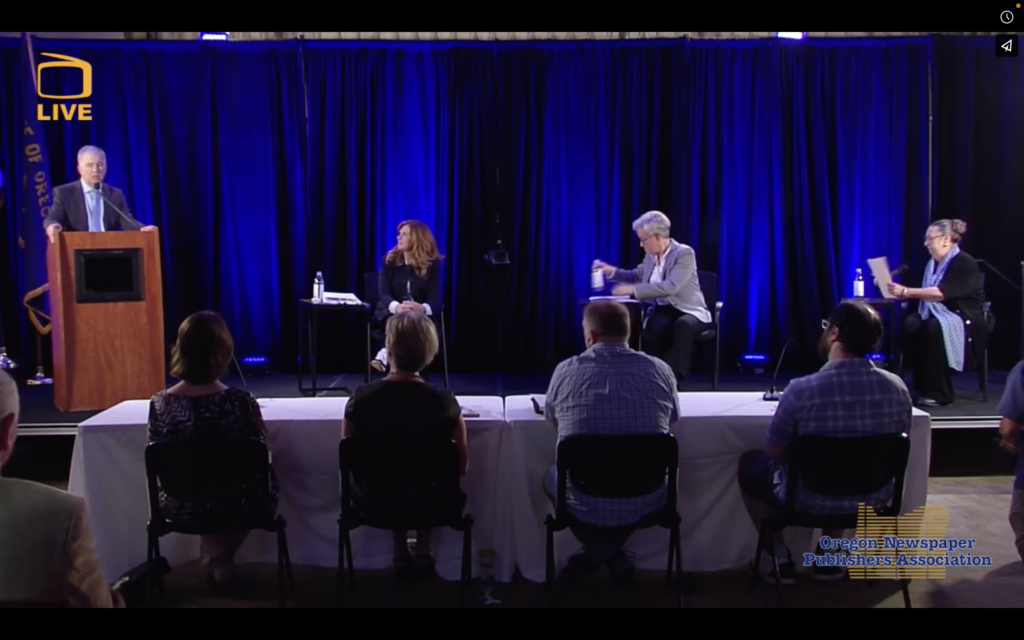 Friday’s forum, hosted by the Oregon Newspaper Publishers Association at a Welches compound, marked the unofficial start of the general election campaign and the first time Democrat Tina Kotek, Republican Christine Drazan and unaffiliated candidate Betsy Johnson met on the stage of the debate. But the three debated publicly and privately during their final years in the state legislature.

Kotek, who served as president of the Oregon House for nine years, argued that only she has the experience needed to address the pressing issues facing Oregon, from homelessness to inflation to by addiction.

“No matter what the other candidates say here today, there is no silver bullet,” Kotek said. “There are no miracle cures. Only hard work will allow us to ensure that every part of our state can thrive.

Drazan, the House Minority Leader from 2019 to 2021, said she should be Oregon’s first Republican governor in four decades because the state needs new leadership.

And Johnson, a former conservative Democratic senator from Columbia County who quit her party to run for governor, said she had a choice between the “radical right” wary of Oregonians and the “progressive left” that they fear.

“Christine wants to be the first anti-choice governor in Oregon history, promising to veto pro-choice policies,” Johnson said. “Tina wants to preserve tent cities and bring culture wars to your child’s classroom. She would have woke us up and broken us all. While these two keep fighting, I’m going to reject political extremes and lead Oregon towards common ground.

At least 14,655 Oregonians were homeless for a single night in January 2020, according to the latest available data from the U.S. Department of Housing and Urban Development’s annual tally.

Kotek described his work on the turnkey project, which was launched with $65 million in 2020 to convert unused hotels and motels into emergency housing. This resulted in about 900 new shelter beds in 13 counties before lawmakers added $60 million in 2021 and 2022.

Ending the homelessness crisis will require more space in shelters, more housing and teams able to work with homeless people to provide them with the resources they need, Kotek said.

“It’s complex, and there’s no one way to solve it,” she said. “You have to do everything. It’s a personal matter on the ground, making sure people who are hurting right now get the services they need to move to a place with a locked door and then move into permanent housing, and we need more accommodation.

Johnson said she supports role models like this at former prison of Wapato in North Portland, a never-used prison that since October 2020 has been a sober living space. People pay $250 a month for a bed and three meals a day, but they have to stay sober.

She said Bend was considering a similar model at an unused prison, although a Bend councilwoman and mayoral candidate, Melanie Kebler, told the Capital Chronicle no such plan was in the works and that there was no unused prison. Johnson’s campaign spokeswoman did not respond to a request for clarification Friday afternoon.

Drazan said the state’s focus on housing and shelters has not solved the problem and more money needs to be spent on wraparound services.

“What we’re going through in Oregon right now has allowed this problem to spiral out of control,” she said.

Each candidate was in the Legislature during the doomed 2019 and 2020 efforts by Legislative Democrats to pass climate legislation capping greenhouse gas emissions. After Republican walkouts denying quorums prevented legislation from moving forward each year, Governor Kate Brown issued an executive order requiring the state Department of Environmental Quality to develop its own cap-and-trade policy. . Cap and trade sets an overall limit on emissions while creating a market to incentivize polluters to reduce them.

As House Democratic leader, Kotek supported the legislation. Drazan led House Republicans out of the state to block legislative action. And Johnson, then a Democratic senator, remained in Salem to oppose the bill.

“While Christine was in Reno by the pool, I was in the Senate standing up to my party that was fighting this bill,” Johnson said. “It’s much more difficult to be in the building, fighting for a good result, than to flee the building. This bill was a monstrosity in the end, and it would have crippled rural economies and significantly hurt workers.

If elected, Drazan said she would repeal Brown’s executive order, and Johnson described it as a “usurpation of the legislative process.” Both said they support hydroelectricity and the maintenance of existing dams.


Both Kotek and Johnson highlighted their longstanding support for abortion rights since the U.S. Supreme Court struck down Roe v. Wade, while Drazan carefully outlined his personal opposition to abortions without offering any policy change. They maintained those positions in Friday’s debate.

“I am a pro-life woman,” Drazan said. “This issue was within Oregon law, and I have been very clear that I will abide by the law.”

As governor, she couldn’t change the law on her own — but she could veto legislation or budget items like the $15 million provided by the Oregon legislature this year to help claimants. to prepare for increased demand from women in states where abortions are illegal.

Johnson said she abides by Oregon’s abortion laws, but does not support using state money to pay for abortion services for outsiders. of State.

“I think Oregon’s tax dollars should be spent on Oregonians,” she said. “That doesn’t mean you turn down a pregnant child or young person from Idaho. Planned Parenthood has enough resources to be able to do this without spending Oregon tax money.

And Kotek, who has been endorsed by Planned Parenthood, said she supports Oregon’s abortion laws she helped pass and supports the use of state resources to maintain access. abortion, even for non-Oregonians.

“We are in too difficult a situation in our country to say no to women who need access to care,” she said.

They also drew distinctions on gun policy, with only Kotek saying she supported a November ballot measure that would require licensing and training before anyone could buy a gun and ban assault weapons. . Drazan and Johnson also opposed gun control legislation while in Salem, although Johnson said she now supports some restrictions.

“When it comes to gun safety legislation and common sense, evidence-based approaches to reducing violence, I’ll be there every time,” Kotek said.

Johnson, who owns and collects guns, said she thinks the minimum age to buy a gun should be raised from 18 to 21 and that the state should institute “really aggressive background checks.” “, including incorporating information from schools.

“I have the confidence of responsible gun owners that I am exactly the person to broker the conversation that would lead us to even more practical solutions,” she said. “You can’t do it to the rest of Oregon; you have to do it with the rest of Oregon.

Drazan said she saw no need for additional restrictions.

“Oregon’s current books laws in this particular category do a good job of protecting safety in our state right now,” she said.

All three said they would have worked hard to ensure that Intel, the state’s largest private employer, opened its next campus in Oregon instead of choosing Ohio.

Kotek said she didn’t know why Intel chose Ohio because she wasn’t a governor, but that she would make sure as governor that she had a personal relationship with Intel’s CEO and other business leaders.

Johnson said she spoke with Intel executives and said Brown failed to pay attention to the company’s needs. As governor, Johnson said she would have business leaders on speed dial and constantly ask them what the state could do to meet their needs.

“No one in the governor’s office saw the warning signs or contacted Intel when the tallest tree in our Silicon Forest headed for Ohio,” she said.

With the tech industry in the so-called Silicon Forest, they discussed the decline of Oregon’s lumber industry. Both Johnson and Drazan grew up in the industry – Johnson’s family owned a thriving sawmill and logging operations in central Oregon, while Drazan, 20 years younger, watched his father and neighbors lose their employment when sawmills and factories closed in southern Oregon.

Johnson said as governor she would ask state regulators to help logging companies comply with state laws rather than trying to shut them down.

Kotek said it will work with wood-dependent communities to adapt to the changes, including supporting the production of mass-produced wood projects like Portland Airport’s new roof. Solid wood consists of boards glued together to create a wood product that is as strong as steel.