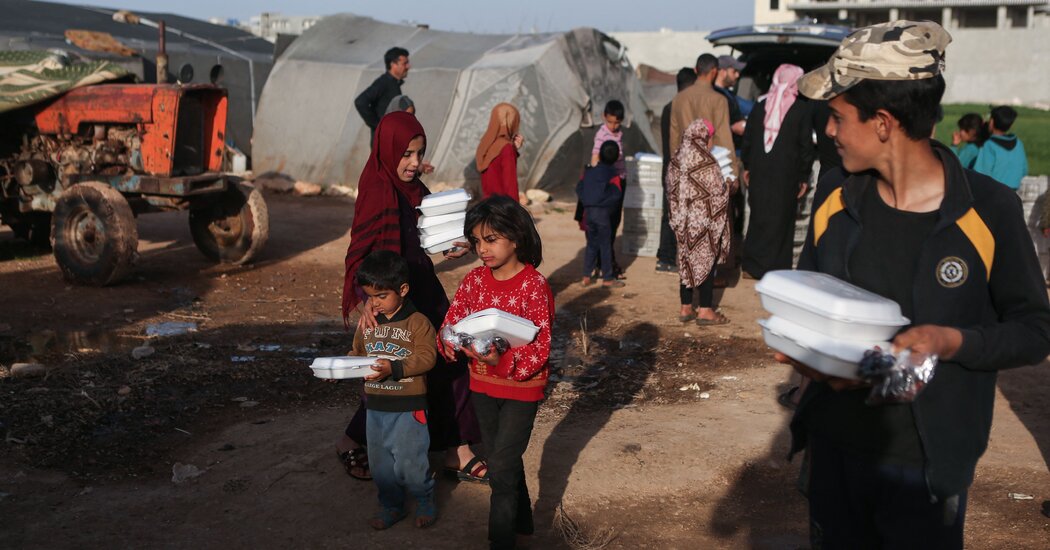 WASHINGTON — Only one road remains open for international convoys bringing food, water and other aid to more than a million Syrians besieged by civil war. Now, officials warn, Russia could try to shut it down or use it as a bargaining chip with world powers in another war some 1,000 miles away in Ukraine.

Diplomats and experts said closing the corridor at the Bab al-Hawa border crossing with Turkey would almost certainly force thousands of people to flee Syria. It would only worsen a refugee crisis in Europe and the Middle East that is already considered the largest in the world since the Second World War.

The UN Security Council, where Russia exercises a powerful veto, will vote in July on whether to keep the aid channel open. But the corridor already appears to be overtaken by fallout from the war in Ukraine and the competing interests of Russia and the United States.

“The war in Ukraine has vast implications for Syria — and for the whole region and for the world,” Jordanian Foreign Minister Ayman Safadi said in an interview this month in Washington.

Mr Safadi said Jordan was watching closely to see how Russia would approach the vote. More than a million Syrian refugees already live in Jordan, he said, and brokering a peace deal in Syria’s 11-year civil war “would definitely require a US-Russian deal”.

“Given the current dynamics,” he said, “the consequences could be severe in terms of the living conditions of Syrian refugees and displaced people.”

Using its veto power in the Security Council, Russia helped close three other humanitarian corridors to Syria in 2020 and last year only agreed to keep the Bab al-Hawa one after intense negotiations with United States. He defended the road closures as necessary to maintain Syria’s sovereignty and pushed for aid to be distributed with the approval of President Bashar al-Assad’s government rather than through the United Nations.

Russia is one of Assad’s benefactors in Syria’s civil war, which began in 2011, and much of the aid went to rebel-held areas. The road from Bab al-Hawa leads to Syria’s northwest province of Idlib, one of the last pockets of rebel-held territory in the country and an area that has become a haven for an extremist organization linked to al-Qaeda.

An international pressure campaign to keep the road open is underway. The United States chairs the Security Council this month and has held a series of meetings on the plight of Syrians who have become homeless or need help to survive.

Russia’s deputy ambassador to the UN, Dmitry Polyanskiy, said Moscow had not decided how it would vote. But in an interview on Friday, he said that under the current system, aid was vulnerable to extremists in Idlib.

“I don’t deny that it also benefits the refugees, but the terrorist groups – they benefit,” he said, adding that the extremists had attacked the deliveries.

Mr Polyanskiy would not discuss negotiations to keep the corridor open, except to say that talks between Russia and the United States were stalling, given the “current geopolitical circumstances”.

“Frankly, we don’t have a lot to make us optimistic about at this point,” he said.

But three foreign diplomats said Russia had sent vague signals suggesting it could try to use the vote to secure concessions in the stalemate over Ukraine. The United States and European countries have imposed various sanctions on Russia to punish the country for invading its neighbor.

The diplomats did not describe the signals in detail and said Moscow had stopped directly linking the fate of the corridor to the war in Ukraine. But they said they believed Moscow would lean on countries directly affected by a new wave of refugees to help them evade sanctions.

One of the diplomats also predicted that Russia would contradict accusations that its invasion had violated Ukraine’s sovereignty by denouncing the aid convoys as an attack on Syria’s territorial integrity.

Separately, a senior US diplomat said the United States and other Security Council countries would send “a clear message” to Moscow urging not to close the road, but that there was no guarantee that would be respected. All diplomats spoke on condition of anonymity to describe the internal discussions.

“The Russians never recognized that Bab al-Hawa was really vital and we must keep it open,” said Sherine Tadros, head of Amnesty International’s UN office. “It was just part of their snack, snack, snack strategy. And it has always been the subject of many transactions in return.

A large majority of Syrian refugees live in Turkey, where authorities have warned for years that the diaspora is pushing the country to breaking point.

Turkey is preparing for what Russia might do, according to two people familiar with the internal discussions who spoke on condition of anonymity to describe them. Both said they expected the road to be part of diplomatic talks with Moscow over Ukraine.

Turkey, a member of the North Atlantic Treaty Organization, supplies arms to Ukraine and has barred Moscow warships from accessing strategic waterways leading from the Black Sea. But this month, Turkish President Recep Tayyip Erdogan signaled that the country would oppose Sweden and Finland joining NATO, citing security concerns. Moscow has long demanded that the military alliance halt its expansion towards Russia’s borders.

In Hungary, Prime Minister Viktor Orban is blocking a European Union embargo on Russian oil to counter rising energy prices. Hungary expelled tens of thousands of refugees from Syria and other Middle Eastern countries, but took in more than 600,000 Ukrainians this year.

Jordan, which has ties to Russia and the United States, has tried to avoid being dragged deep into the standoff over Ukraine and is instead urging the Biden administration to restart negotiations to end the civil war in Syria. The conflict in Ukraine, Safadi said, has created “more of a stalemate”.

“The status quo is, from our point of view, dangerous because it only increases the suffering of the Syrian people,” he said in the interview. Jordan is one of several Middle Eastern countries that have recently resumed relations with Mr. al-Assad’s government, despite Washington’s disapproval.

Talks in Europe. European Union leaders will meet on May 30-31 to discuss Ukraine’s financial needs for reconstruction and the effects of the war on the global economy. But hopes that the summit would also see an end to a standoff with Hungary over a possible Russian oil embargo appear to have faded.

The Syrian civil war has forced 5.7 million people to leave their country. About 6.7 million Ukrainians have fled their country since the Russian invasion.

A looming global food shortage, caused in part by the disruption of wheat exports from Ukraine and Russia following the invasion, is expected to cause further suffering.

“Let’s assume we’re going to have a humanitarian crisis because of the lack of food,” Italian Prime Minister Mario Draghi told reporters in Washington this month when asked about the growing number of refugees in Europe. “Then the situation could become very, very difficult to manage.”

In a statement on Thursday, the Kremlin said it would help avert food shortages if the West eased its sanctions. President Vladimir V. Putin “stressed that the Russian Federation is ready to make a significant contribution to overcoming the food crisis through the export of grain and fertilizers, provided that the politically motivated restrictions of the West be lifted,” said the statement, which was released. after a phone call between Mr Putin and Mr Draghi on Thursday.

Hundreds of thousands of refugees and migrants from the Middle East and North Africa have arrived in Italy during a crisis that peaked in 2015 when 1.3 million people fled to Europe. In Washington, Draghi said Italy had received nearly 120,000 Ukrainians this year. But he said the number of Syrians who remained in his country, instead of moving elsewhere in Europe, was “not significant”.

At an international donors’ conference this month in Brussels, the United States pledged nearly $808 million to meet humanitarian needs in Syria – one of the largest U.S. contributions since the start of this war. The UN refugee agency raised $6.7 billion at the conference to support Syria this year and beyond, though it asked for $10.5 billion for 2022 alone.

Announcing the aid, Linda Thomas-Greenfield, US ambassador to the United Nations, said the food shortage had made humanitarian aid to Syria “particularly important this year”. Without mentioning Russia, Ms Thomas-Greenfield called July’s vote on the relief route a “matter of life and death”.

Mr Polyanskiy, the Russian diplomat, said other unofficial border crossings into Syria could allow aid deliveries to continue. “It will be difficult to get UN aid through these points, of course, but that doesn’t mean these crossings will be idle,” he said.

The issue has also prompted comparisons between Russia’s support for a brutal government in Syria and Mr. Putin’s own assaults in Ukraine.

“No one who has followed Putin’s brutality in Syria over the past decade should be surprised that he is starving and bombing Ukrainians – just as he starved and bombed Syrians,” said Senator Bob Menendez, Democrat of New Jersey and President of the Senate. Relations Committee.