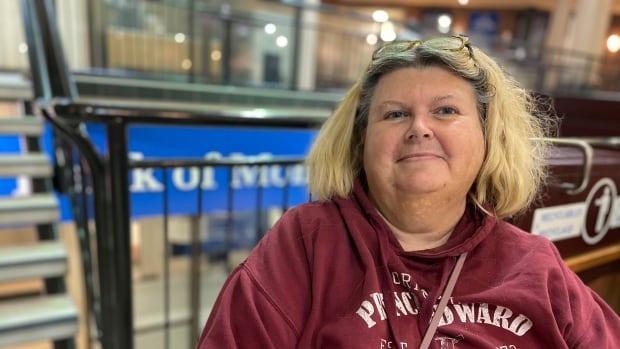 More than three weeks after post-tropical storm Fiona wreaked havoc across Prince Edward Island, some households in the province are still struggling to access financial support.

Erma Coffin was one of dozens of Islanders lining up when the Canadian Red Cross opened its temporary location at Confederation Court Mall in Charlottetown on Monday.

She came to verify her identity – which she was told she needed to do to receive $250 distributed by the Red Cross on behalf of the province as part of its relief efforts in Fiona.

Coffin was without power for nearly 10 days after Fiona struck and said she lost two freezers and two fridges of food as a result.

She said she first applied online on September 30.

“I called twice last week and they were like, ‘Just wait,'” she said.

That’s exactly what Coffin did, then called back on Sunday to follow up.

After more than two hours of queuing on Monday, Coffin was unsure how much financial assistance she would walk away with — and whether or not that would include the additional $500 payment from donations to the Red Cross appeal for the Hurricane Fiona in Canada.

“We were told that for the $500 you had to have completed the survey,” she said.

“I know it’s for people in need and people who have suffered more damage. I’m not 100 per cent sure… Nobody really seems to know that.”

According to the Red Cross, all of the nearly 58,000 island households that signed up for the $250 provincial funding should have received a survey from the organization, asking questions about how they were affected by the storm, how hard they struggle, and what other support they have.

Bill Lawlor, director of the PEI Red Cross, said the organization uses the results of these surveys to determine eligibility for the additional $500 payment.

He said the Red Cross had not clearly spelled out the qualification criteria to ensure people answered honestly.

“We asked for things like your ability to carry on with your daily activities, how has that affected you financially?” he said.

“While it may be a given or a thought that everyone is going to have the same answers, their answers are quite varied.”

In order to receive the $500 payment, Lawlor said households must be registered and authenticated with the Red Cross, have completed the survey by email or phone, and be unable to meet their basic needs. following the storm.

Needs “will increase over time”

So far, he said the results indicate many Islanders need additional financial support. He said these households are given priority for this payment.

“We know this isn’t the end for us,” Lawlor said. “So here’s $500 for those who have identified the most pressing needs, now and in the weeks to come.”

“But there will be more needs which will also increase over time.”

The Red Cross told CBC News that more than 40,000 island households have responded to the survey so far. Nearly 5,000 of them have already received the additional $500 payment, although the organization is still analyzing the survey responses.