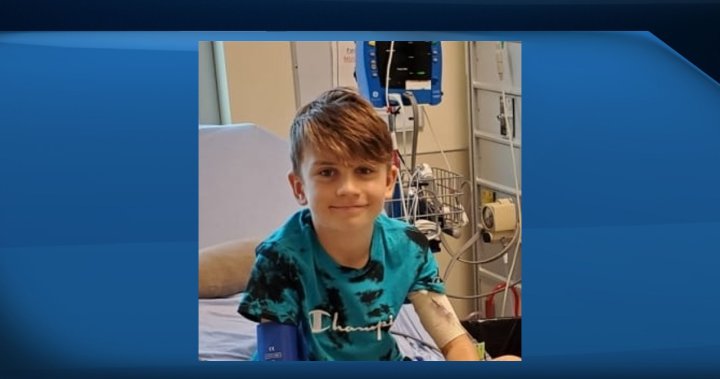 When Bode Fox decided he wanted to raise money for the Alberta Children’s Hospital (ACH), he turned to his mother Susanne for help.

“I spoke to him and we said, ‘What should we set as a goal? ‘” said Susanne Fox, a former Global News anchor turned communications expert. “‘Do you think $500?’ And he’s like, ‘I think that sounds awesome, mom.’

Looking back, it was a fairly modest goal and one that took very little time to achieve.

“Within 24 hours, it was like a poppin!” said Susanne, who contacted her family and friends to support Bode’s participation in the 19th edition Country 105 Caring for Kids Radiothon to benefit the Alberta Children’s Hospital Foundation (ACHF).

“It really makes me feel good because they (the donors) haven’t even – they haven’t even heard of me,” Bode said. “That they take time out of their day and donate a few $100 means a lot.”

“I can’t even believe what he was able to do,” said ACHF President and CEO Saifa Koonar. “He inspired people around him to give and this young boy did and we couldn’t be more grateful.”

Bode has his own reasons for fighting to help the more than 100,000 sick and injured children who visit ACH each year.

Since last May, the 10-year-old has been battling a rare blood condition called aplastic anaemia, a condition that leaves him prone to uncontrolled bleeding and extremely vulnerable to infections.

“It’s a very rare blood disease and basically it’s bone marrow failure,” Susanne explained. “So the stem cells in his body are destroyed and the stem cells are, you know, ground zero for all of us.

“We don’t know what caused it, but we do know that his body is destroying his stem cells as quickly as his body is trying to make them.”

“He is at high risk of bleeding. A small bump becomes a big bruise on her body,” Susanne said. “His mouth is still bleeding. He has almost no immunity to most things and a small cut can lead to a high fever and blood infection within hours.

“It’s been tough and I’ve definitely learned a lot of things I didn’t know about my body,” said Bode, who has had more than 50 platelet transfusions and nearly 20 blood transfusions in the nine months since. followed his diagnosis.

2:10
A key new technology to free children who are “locked” in their bodies

There is no known cure for aplastic anemia, but there are a few different treatments.

Unfortunately for Bode, one of them – immunosuppressive therapy – didn’t work. The next step is a stem cell transplant which was scheduled for March but has since been delayed.

“We are disappointed because… we work very hard to keep him safe and every week there is a delay,” Susanne said in tears. “There are risks for him.

With the exception of his twice-weekly hospital visits for transfusions, Bode has been in strict isolation since May 2021. The COVID-19 pandemic has made it difficult for even his parents to leave home for fear of death. bring viruses into the house.

Despite daily setbacks and challenges, Fox said fundraising was a really good and positive distraction for her son.

“He got up every day this week and read the messages, and it really lifted his spirits,” Fox said. “He has a real kick in there.

“He can’t wait to talk to his doctors and nurses and tell them how much money has been raised for this.”

All funds raised through the radiothon will support ACHF in its efforts to fund research, education and technology at Calgary Children’s Hospital.

Caring for Our Children Radiothon 2022

“As for the children’s hospital, there is nothing typical about this hospital. It’s extraordinary in every way,” said Susanne. “And it’s because of this community and fundraisers like this that it is. So it’s no coincidence.

“It’s a child-caring community and because of that, our kids get the best care.”

“I’m very grateful for that and I can’t explain how good the nurses and doctors are there. Some of them are the best in the world. And I feel really, really safe there,” Bode added.